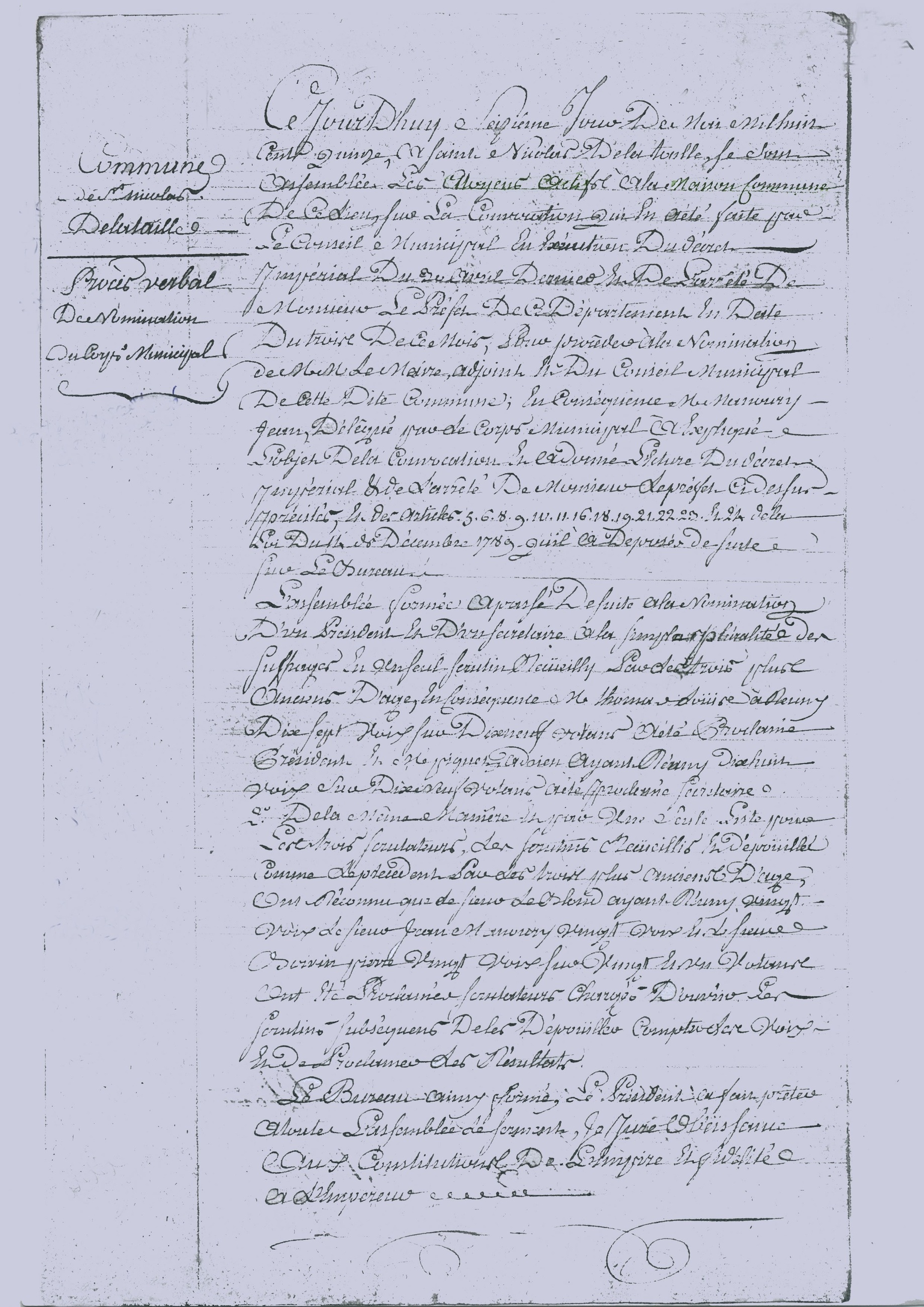 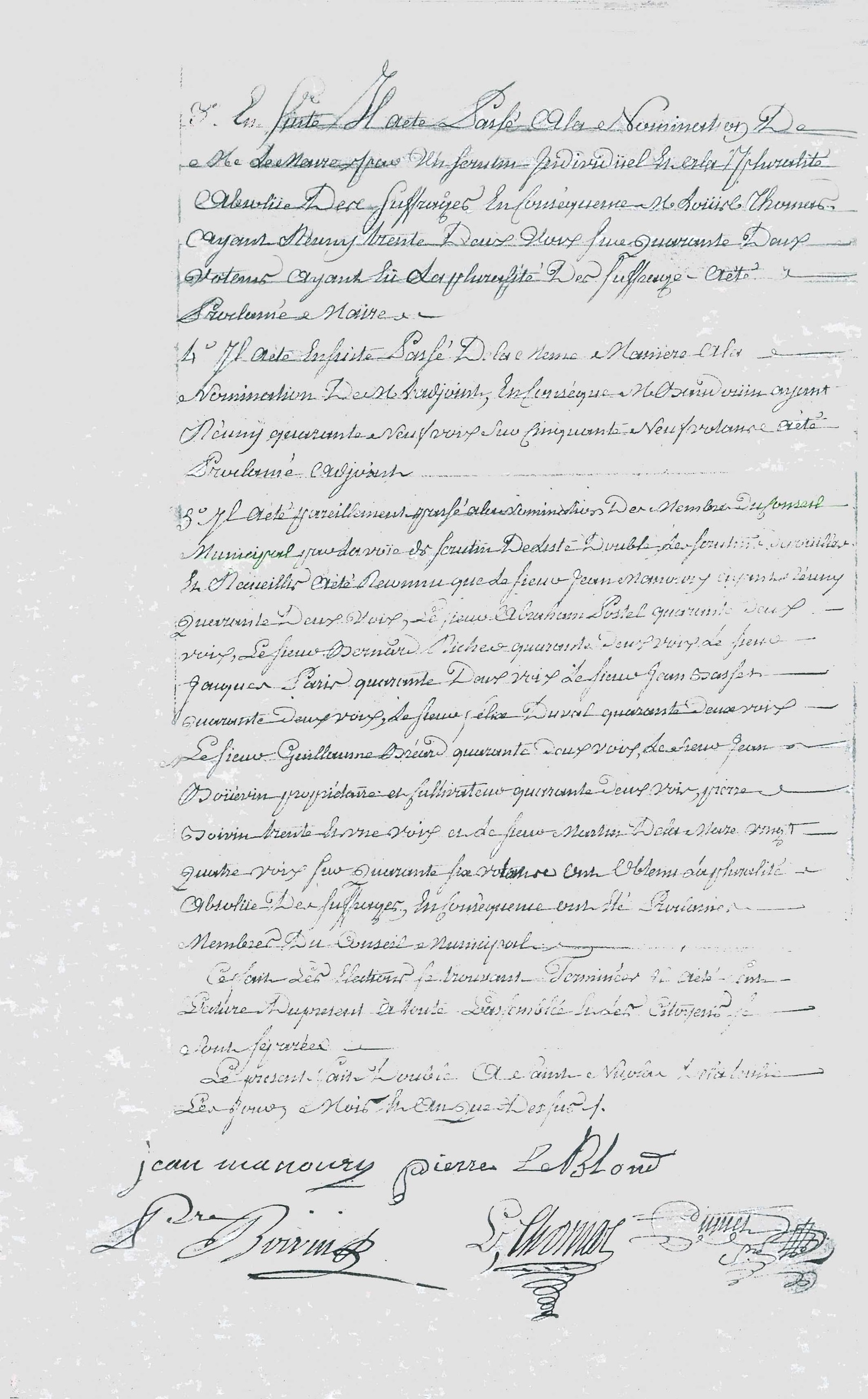 On 30 April, Napoleon took the surprising and unprecedented step of calling on all male citizens in villages and towns of under 5000 to elect their mayors and adjoints (deputies). This risked not only disrupting war preparations but also seeing numerous communes falling into royalist hands.

Over the coming weeks, tens of thousands of communal electoral assemblies met, elected their officials and drew up minutes of their proceedings, like the one shown here for the electoral assembly at Saint-Nicolas-de-la-Taille, held on 16 May 1815. Unlike in subsequent municipal elections, in the fraught circumstances of the 100 Days, departmental officials did not have time to collate results and pass them up the line. Consequently, how citizens responded to this short-lived experiment in village democracy can only be discovered through the intensive study of these documents − and until now no such study had been undertaken for any part of France.

This has not prevented historians from seeing the elections as a humiliating setback for Napoleon, resulting in the confirmation in office of men overwhelmingly hostile to his restored regime. Perhaps, though, holding the elections, which, according to one contemporary was ‘the only popular thing Bonaparte did on his return’ (Mémoires de Madame de Chastenay, vol. 2, (Paris, 1896), p. 514), helped secure his ‘posthumous’ reputation as a ‘man of the people’.

For an account of the elections at Saint-Nicolas-de-la-Taille, as given by the minutes shown, see 'Further Information'.

Saint-Nicolas-de-la-Taille is a commune in the arrondissement of Le Havre in the Norman department of the Seine-Maritime (then Seine-Inférieure). At the time of the 1806 census it had 879 inhabitants. During the 100 Days, its electoral assembly was convoked by the municipal council, in accordance with the decree of 30 April 1815, and met on Tuesday 16 May 1815 in the town hall (not in the parish church, as was more often the case). The minutes, which consist of two folio sheets, are written in a regular hand and give quite a full and articulate account of the assembly’s operations.

As delegated by the council, Jean Manoury opened proceedings by explaining the purpose of the assembly and reading aloud the regulations it was to follow, including the famous municipal law of 14 December 1789, which was (partially) resurrected for the occasion.
Five ballots were held: the first two to choose the assembly’s president and secretary and the three tellers (between them forming the ‘bureau’); the third and fourth to elect the mayor and his deputy respectively; and the fifth to elect its full complement of ten municipal councillors. This last ballot was in fact in contravention of the decree of 30 April, which envisaged only the election of mayors and adjoints. It is tempting to see this as a bid to seize fuller communal autonomy than Napoleon was willing to concede, but it is more likely that the extra ballot arose as a result of the assembly mistakenly following provisions of the Revolution’s municipal law which government had intended should not apply.

Unusually, the assembly grew considerably in the course of its proceedings: 19 votes were cast in the first ballot whereas 46 voters took part in the ballot for mayor and 59 in the ballot for adjoint. By our reckoning, a third of the adult population took part in this latter ballot, which is just above the average turnout rate for the department. (All male resident aged 21 or over, except for hired servants, were entitled to vote.)

As in the majority of communes in the department, the incumbent mayor (Louis Thomas) and the adjoint (François Baudouin) were re-elected, although in the mayor’s case with a lower than average vote share: (70 per cent against 85 per cent for a sample of 152 of the department’s communes).

Another way in which this assembly differed from those in neighbouring communes was that the minutes specify that the whole assembly took the oath of ‘obedience to the Constitutions of the Empire and loyalty to the Emperor’. However, this should not be taken to mean that the commune was a Bonapartist stronghold: like many in the area, it returned the register of votes on the plebiscite on the Acte Additionnel without a single resident having recorded a vote.

Shortly after his election, the mayor was suspended and replaced by ‘a rich protestant’ after being the object of an anonymous denunciation. It was said he protected deserters from the army and his son openly paraded his royalist sympathies by wearing the white cockade of the Bourbons. Not surprisingly, Thomas senior was re-instated as mayor on Louis XVIII’s return and with Baudouin was still in office on the eve of the Revolution of 1830.