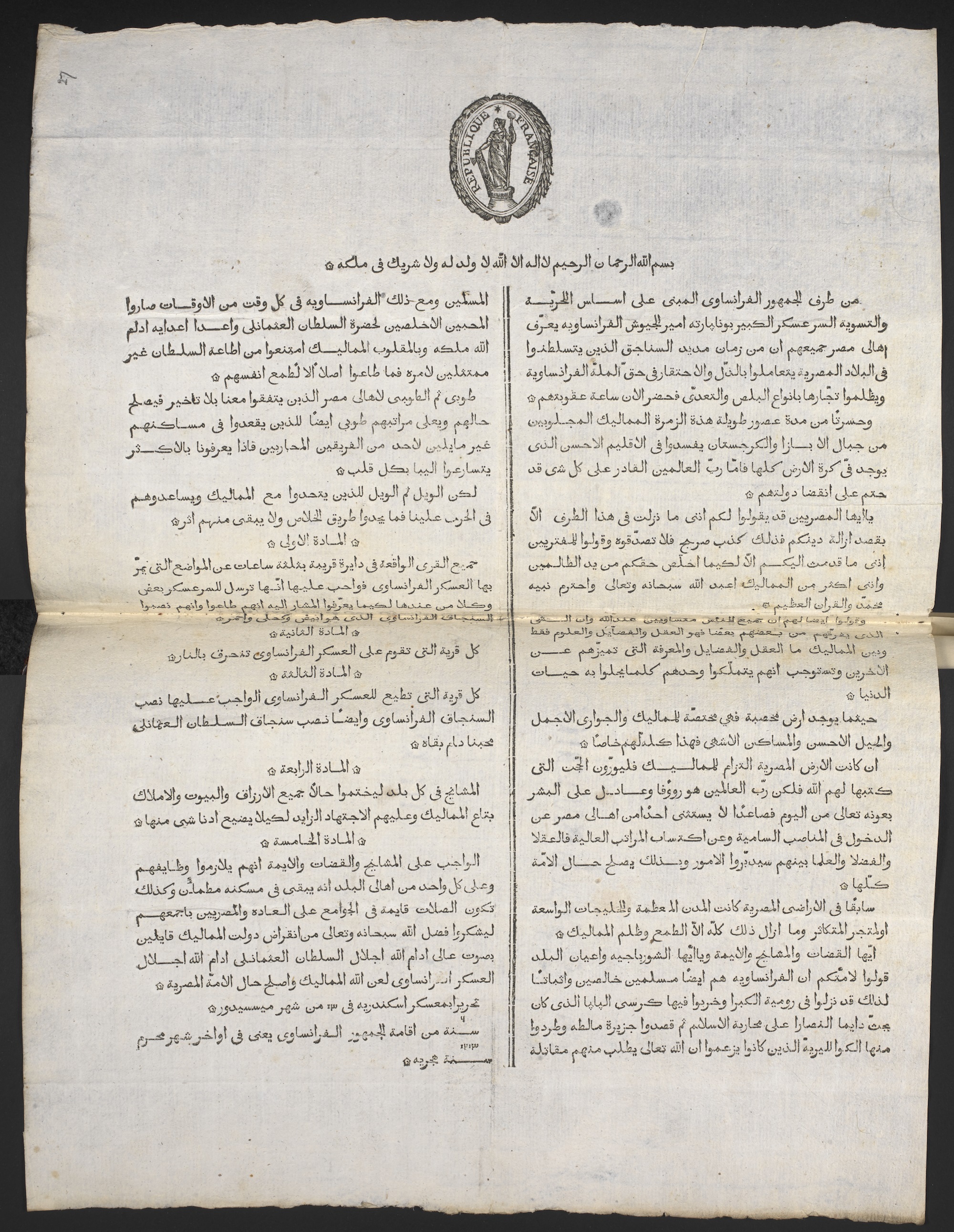 In 1815 the Egyptian ruler Muhammad Ali returned abruptly to Cairo from his campaign against the Wahhabis in the Arabian Peninsula. Historians have suggested that his return was the result of the news of Napoleon’s escape from Elba: well aware of Bonaparte’s reputation, Muhammad Ali wanted to keep an eye on new political developments in Europe.

Muhammad Ali, a soldier of Albanian origin, had come to power in Egypt after the end of the French occupation there in 1801, succeeding in making himself the de facto ruler under the formal suzerainty of the Ottoman Sultan.

Napoleon, not yet Emperor but a general under the Directory, had invaded Egypt in 1798 at the head of the Armée de l’Orient: French troops remained until forced to retire by the British in 1801.

A master of propaganda, Bonaparte had issued this proclamation, rendered into Arabic by Syrian Christian translators, on his arrival in Alexandria. In the name of ‘the French Republic built on the foundation of Liberty and Equality’, Bonaparte assures the Egyptians of good intentions towards Egypt and Islam, and urges them to rise up against their Mamluk rulers. The proclamation, and Napoleon himself, have generated interest in the Arab world ever since.

For a translation of the proclamation, see ‘Further Information’.

Contemporary English translation from: Copies of original letters from the army of General Bonaparte in Egypt, intercepted by the fleet under the command of Admiral Lord Nelson. (London, J. Wright, 1798-1800, 3 vols.), vol. 1, pp. 235-237.

IN the name of God, gracious and merciful.—There is no God but God; he has no son or associate in his kingdom.

The present moment, which is destined for the punishment of the Beys, has been long anxiously expected. The Beys, coming from the mountains of Georgia and Bajars, have desolated this beautiful country, long insulted and treated with contempt the French Nation, and oppressed her merchants in various ways. Bonaparte, the General of the French Republic, according to the principles of Liberty, is now arrived; and the Almighty, the Lord of both Worlds, have sealed the destruction of the Beys.

Inhabitants of Egypt! When the Beys tell you the French are come to destroy your religion, believe them not: it is an absolute falsehood. Answer those deceivers, that they are only come to rescue the rights of the poor from the hands of their tyrants, and that the French adore the Supreme Being, and honour the Prophet and his holy Koran.

All men are equal in the eyes of God: understanding, ingenuity, and science, alone make a difference between them: as the Beys, therefore, do not possess any of these qualities, they cannot be worthy to govern the country.

Yet are they the only possessors of extensive tracts of land, beautiful female slaves, excellent horses, magnificent palaces! Have they then received an exclusive privilege from the Almighty? If so, let them produce it. But the Supreme Being, who is just and merciful towards all mankind, wills that in future none of the inhabitants of Egypt shall be prevented from attaining to the first employments and the highest honours.—The Administration, which shall be conducted by persons of intelligence, talents, and foresight, will be productive of the happiness and security. The tyranny and avarice of the Beys have laid waste Egypt, which was formerly so populous and well cultivated.

The French are true Mussulmen. Not long since they marched to Rome, and overthrew the Throne of the Pope, who excited the Christians against the professors of Islamism (The Mahometan religion). Afterwards they directed their course to Malta, and drove out the unbelievers, who imagined they were appointed by God to make war on the Mussulmen. The French have at all times been the true and sincere friends of the Ottoman Emperors, and the enemies of their enemies. May the Empire of the Sultan therefore be eternal; but may the Beys of Egypt, our opposers whose insatiable avarice has continually excited disobedience and insubordination, be trodden in the dust, and annihilated!

Our friendship shall be extended to those of the inhabitants of Egypt who shall join us, as also those who shall remain in their dwellings, and observe a strict neutrality; and when they have seen our conduct with their own eyes, hasten to submit to us; but the dreadful punishment of death awaits those who shall take up arms for the Beys, and against us. For then there shall be no deliverance, nor shall any trace of them remain.

Art. 1. All places which shall be three leagues distant from the route of the French army, shall send one of their principal inhabitants to the French General, to declare that they submit, and will hoist the French flag, which is blue, white, and red.

Art. 2. Every village which shall oppose the French army shall be burned to the ground.

Art. 3. Every village which shall submit to the French, shall hoist the French flag, and that of the Sublime Porte, their Ally, whose duration be eternal.

Art. 4. The Cheiks and principal persons of each town and village shall seal up the houses and effects of the Beys, and take care that not the smallest article shall be lost.

Art. 5. The Cheiks, Cadis, and Imans, shall continue to exercise their respective functions; and put up their prayers, and perform the exercise of religious worship in the mosques and houses of prayer. All the inhabitants of Egypt shall offer up thanks to the Supreme Being, and put up public prayers for the destruction of the Beys.

May the Supreme God make the glory of the Sultan of the Ottomans eternal, pour forth his wrath on the Mameloucs, and render glorious the destiny of the Egyptian Nation.