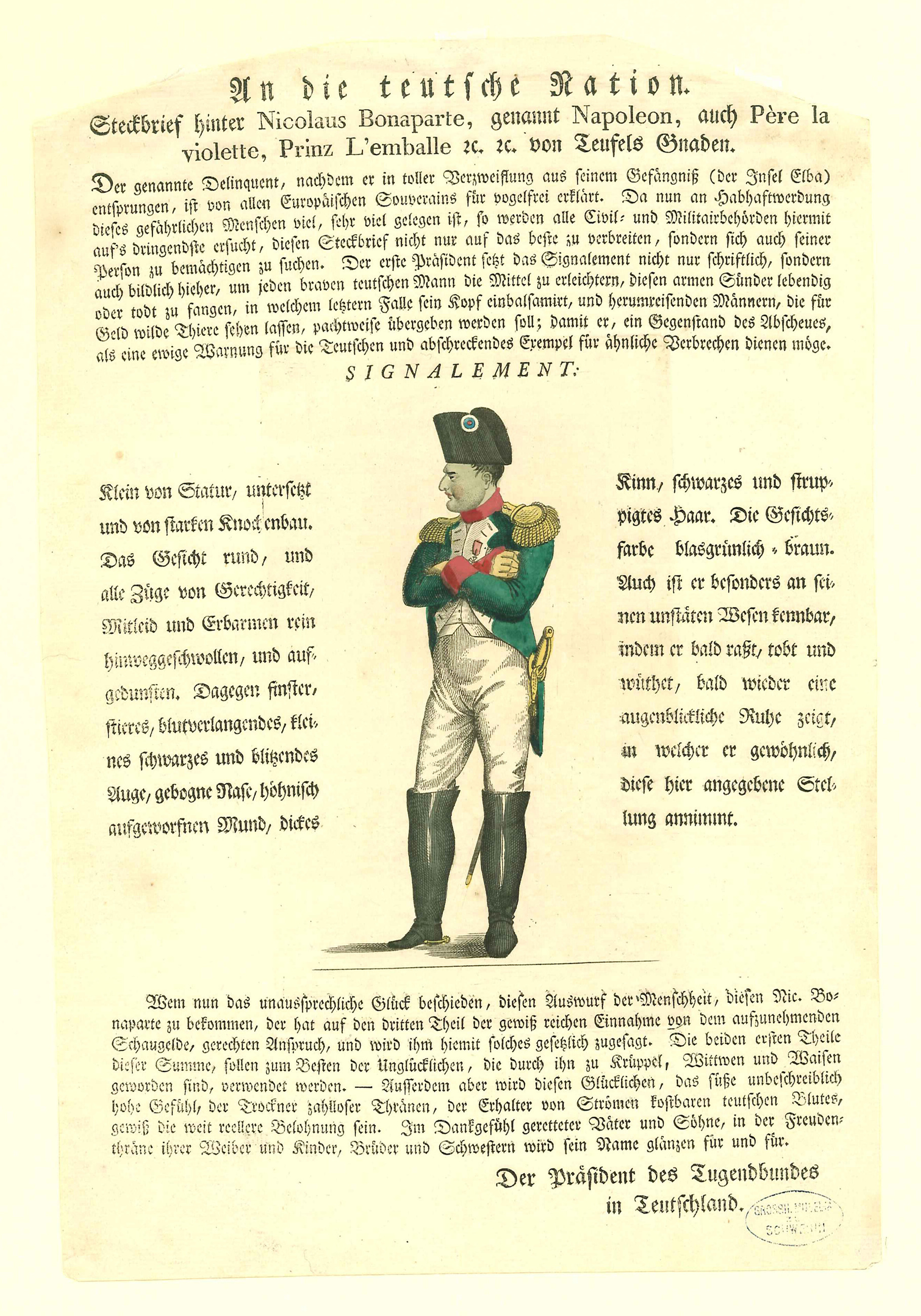 A German Warrant for Napoleon’s Arrest

While Napoleon did have supporters in German lands, over the years he had caused great suffering to those living there: from the financial burden of occupation and annexation to the conscription of Germans for his campaigns, not to mention the battles fought on German soil. The Wars of Liberation brought together north and south Germans, Catholics and Protestants against a common enemy, and for this reason are often seen as key to the development of pan-German national sentiment.

This poster alerts German readers to the escape of Napoleon from Elba, and to his outlaw status, which had been declared mid-March. Along with Napoleon’s titles, the poster details his physical features, using a well-known portrait by Heinrich Anton Dähling from 1806: for a full translation, see ‘Further Information’. It encourages everyone to recapture Napoleon dead or alive: if dead, his embalmed head is to be displayed as a warning.

Addressed to ‘die teutsche Nation’ (the German nation), rather than individual kingdoms or states, it echoes the famous ‘Reden an die deutsche Nation’ (‘Addresses to the German Nation’) given by the philosopher Johann Gottlieb Fichte in Berlin in 1807, which called on Germans to unite around their shared history and language, and to emancipate themselves from French occupation. The poster’s attribution to the president of the ‘Tugendbund’ (the ‘League of Virtue’) appears to refer to the secret society of Prussian noblemen formed in 1808, in the wake of Napoleonic defeat and occupation, and banned by 1809 because of its anti-French sentiment. The poster thus seeks to build on pre-existing resentment of Napoleon and earlier pan-German nationalism.

Translation: To the German Nation [Note the spelling here of ‘teutsche’ and ‘Teutschland’ with a ‘t’ rather than a ‘d’: around this time, the former, older spelling became fashionable as a way of evoking a glorious German past.]

A warrant for Nicolas Bonaparte, named Napoleon, also ‘Père la violette’ [see entries for the 3 and 20 March] and ‘Prinz L’emballe’ [from the French verb ‘emballer’ (‘ to wrap up’) and possibly a reference to his propensity for plundering], &c &c, by the grace of the devil.

The delinquent named here, after he in great despair sprang from his prison (the island of Elba), is declared an outlaw by all European sovereigns. Since now so very much rests on the capture of this dangerous person, herewith all civil and military personnel are with the greatest urgency requested not only to disseminate this poster as much as possible, but also themselves to seek to seize his person. The president sets down the personal description not only in written form, but also in illustrated form, to enable every brave German man the means to capture this poor sinner, alive or dead – in which latter case, his head should be embalmed, and rented to those touring men who exhibit wild beasts for money, so that he, an object of loathing, may serve as an eternal warning for the Germans and as a deterrent for similar crimes.

Personal description: Small of stature, stocky, and of strong bone structure. The face: round, bloated, and all features of justice, compassion and mercy entirely absent. Conversely dark, vacant, bloodthirsty, small black and glittering eyes, a crooked nose, a sneeringly pouting mouth, a thick chin and black and unkempt hair. The skin colour: a pale greenish brown. He is also particularly recognizable in his unsettled manner, in that he one moment rants and raves, the next moment displays a temporary calm, in which he usually assumes the pose given here.

He to whom the inexpressible happiness falls to come by this outcast of humanity, this Nic. Bonaparte, he has a fair claim on a third of the certainly rich income from the bounty collected, and such a claim is herewith legally assured to him. The first two thirds of this sum shall be used for the benefit of the unhappy who because of him [Bonaparte] have been crippled, widowed and orphaned. Apart from this however, a more worthy reward will certainly be the sweet, indescribably high feeling of being the dryer of countless tears, the preserver from streams of costly German blood. In the gratitude of saved fathers and sons, in the joyful tears of their women and children, brothers and sisters, his [the captor’s] name will shine on and on. The President of the League of Virtue in Germany