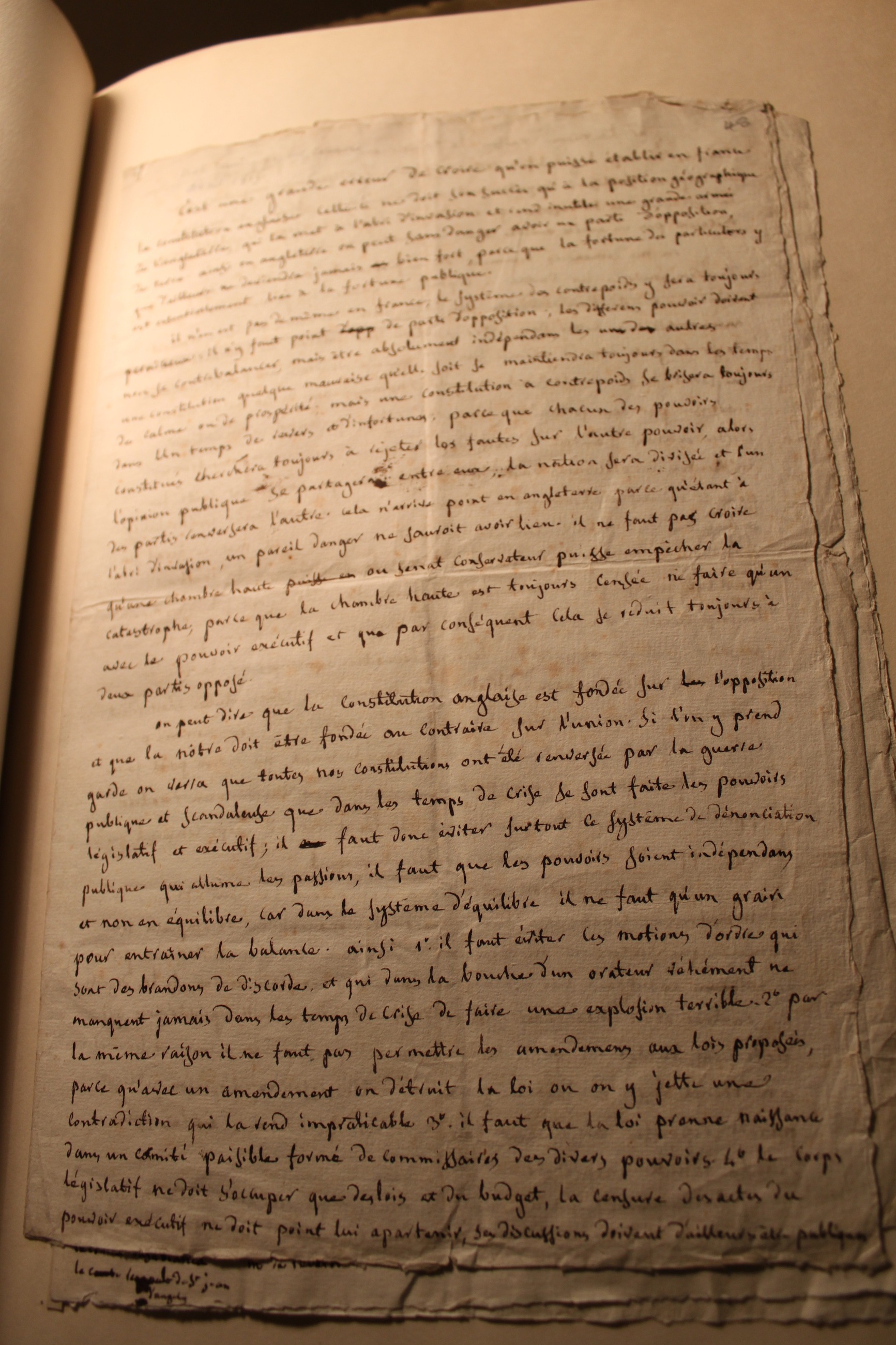 These three folios held by the Curzon Collection (dated April 1815) contain the notes of Lazare Carnot, Interior Minister during the 100 Days, who sat on the special commission for the creation of a new French constitution. Given the three weeks or so between the creation of the constitutional commission and the first draft (drawn up by Benjamin Constant – see the entry for 14 April), the committee had the time to discuss and disagree about how to go about their task.

The majority proposed a constitution based on Louis XVIII’s Charte and on the British constitution. Carnot alone rejected this approach. Here he notes how the British representative system of equilibrium, with an opposition party, would be impossible for France. Such an opposition, he thought, had always taken advantage of moments of crisis to overthrow the legislative and executive power. The French system had to be one of national unity, avoiding a system of denunciation which would enflame passions. There could be no equilibrium as in Britain.

All the powers had to be entirely separate, dealing with different issues. The Senate though had the power of censure. Appointments for the latter body, he proposed, should be by the Emperor alone – it would be an important political lever for him –, but senators should not be hereditary. The 123 names which close the document – his suggestions for inclusion in the Senate – include some surprising figures from the pre-Consular and Imperial days, notably ideologues such as Antoine Destutt Tracy and Alexandre Lameth and liberals such as Lafayette.

For more on the constitution, click on ‘Further information’ below.

In the first days of his return to the Tuileries, Napoleon was forced to come to terms with the proclamations he had made in Lyons on the way back to power, proclamations that had verged on the Jacobin in their opposition to Louis XVIII and his ‘Charte’ or Charter. A new constitution was the key, a document that would establish Napoleon as a ‘new and improved’ monarch.

A special commission was set up to draw up the new founding text. And in his desire to show himself as ‘liberal’, Napoleon had assembled a group largely composed of moderates, namely, Cambacérès, Maret, Carnot, Regnaud de Saint-Jean-d’Angely, Boulay-de-la-Meurthe, Merlin-de-Douai and Defermon. These men were to draw up a constitution that would be submitted to the Conseil d’Etat and then put before a plebiscite. At this point, however, Napoleon dropped a bombshell and approached a special constitutional trouble shooter in the form the arch-liberal and arch-enemy of his, Benjamin Constant, the would-be lover of Germaine de Staël and fierce opponent of the Imperial regime up to its end in 1814.

Extraordinarily, Constant accepted the challenge, and after several meetings with Napoleon, it was his constitutional document which was presented (first draft on 15 April) to the constitutional committee and then to the Conseil d’Etat – where the text met with one or two amendments. Given the three weeks or so between the creation of the constitutional commission and Constant’s first draft, the committee therefore had had the time to discuss and disagree about how to go about their task. The majority proposed a constitution based on Louis XVIII’s Charte and on the British constitution. Carnot alone rejected this approach, claiming that a continental power could not permit itself to adopt a constitution which could only work on an island unthreatened by land armies.

For Carnot, the salvation lay in the complete separation of the bodies of the state – namely, the Emperor (chosen by the people), the Senate and the Chamber of Deputies. As he claimed in his notes, only the complete separation of the intermediary bodies beneath the emperor would avoid the disasters of the Revolutionary years of 1790-99. However, others in power, notably Fouché, saw Carnot as an ineffectual utopian and no longer the brilliant ‘organiser of victory’ of 1793. Indeed, the commission followed Constant’s ‘improved Charte’ as Chateaubriand called it, with its deliberative chambers, elected by as large a constituency as possible, its hereditary peerage, and its guaranteed rights and liberties.

Napoleon however, on many of the points, had the final word, most notably on the confiscation of the property of those who followed Louis XVIII into exile and in the title of the document. The name “Act additional to the constitutions of the Empire” was his express wish; it would, he thought, umbilically link the two regimes, despite the reticence of the commission and Constant. By this act alone, Napoleon left himself open the criticism that in fact nothing had changed, and he had remained the same Napoleon who had led France down into the First Abdication. The ‘Acte additionnel’ was finally signed on 22 April 1815 and published the following day.