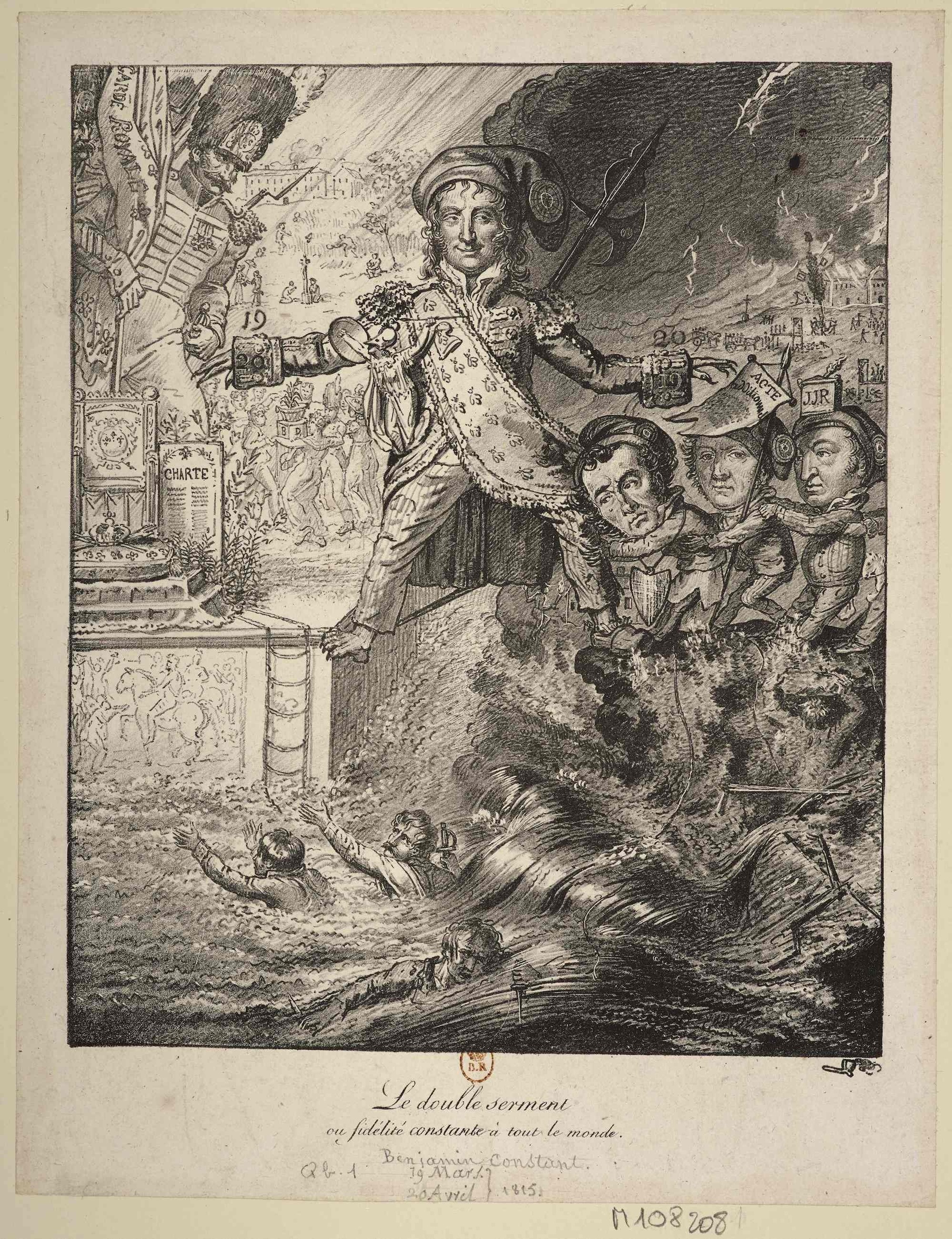 On 14 April 1815, Napoleon summoned Benjamin Constant to deliberate with him on a revised constitution for the Empire, so heralding his much-debated liberal turn. There followed a week of intense debate, culminating in the publication of the Acte additionnel in the Moniteur of 23 April (though in the course of those days Constant also found the time to give a reading of his as yet unpublished novel 'Adolphe' in Madame Récamier’s salon).

Constant’s collaboration with Napoleon was long to haunt him, as this print makes clear. It was published in 'La Foudre', a royalist paper, in 1822. On the eve of Napoleon’s entry into Paris, Constant had rallied to the Bourbons and denounced the Emperor as a latter-day Attila. A month later, he was nominated to the Conseil d’État: this is what the print purports to depict, alongside the disaster which Napoleon’s ‘invasion’ represented in Royalist eyes. Constant was at pains to justify his apparent volte-face in the 'Mémoires sur les Cent-Jours', to this day a major historical source: only Napoleon, he concluded, could save France from invasion and here too was an opportunity for the Emperor to reinvent himself as a constitutional leader.

The Acte additionnel would come to nothing and by 1822 Napoleon was in his grave. But the politics of the Restoration were indelibly marked by the encounter which was briefly to make him Constant’s disciple.

This print was published by Villain; the date of the dépôt légal is 18 May 1822 and it is mentioned in the Bibliographie de la France for that year (the plate measures 32 x 24.9 cm; the image, 26.5 x 22 cm). It appeared in the same month in number 74 of La Foudre, a royalist paper published by Alphonse de Beauchamp.

The image juxtaposes the happy state of France until the flight of the King on 19 March, the date on which Constant had published his denunciation of Napoleon (on the left) with the chaos that had befallen the nation by the time when Constant became a member of the Conseil d’État on 20 April (on the right). Constant is depicted with Foy, Girardin and Manuel, all liberal collaborators of his in the second Restoration. Each of these figures is identified in a minutely detailed satirical commentary which accompanies the image in La Foudre, where the central protagonist is cryptically named as Biengamin Content.

Like this print, much of the iconography of the meeting between Constant and Napoleon on 14 April, including well-known prints made from works by Philippoteaux, is retrospective, testifying to the extent to which from this point onwards Constant’s legend is invaded by that of Napoleon. A final meeting with ‘l’Attila vaincu’ (a phrase we owe also to Madrolle) took place on 24 June 1815, just before Napoleon’s departure from Paris.

Constant’s writings span more than thirty years and many of them are now available in Gallica: see here

Constant’s reading of Adolphe on 19 April 1815 was to become legendary, owing to the account given by Victor de Broglie in his Souvenirs of the febrile atmosphere in which it was received (the novel was first published in London and in Paris in the following year)


La Foudre
(one of four volumes; includes no. 74, but Villain’s ‘lythographie’ is absent from this digital edition)

In an entry on Constant in his Biographie moderne, published in 1815, Alexis Eymery used the word ‘invasion’ to describe Napoleon’s return from Elba (vol. 1)