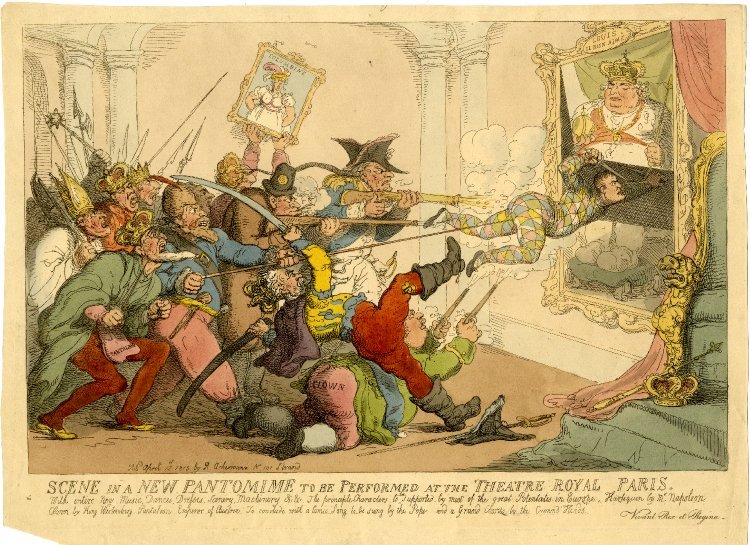 Source: © Trustees of the British Museum; reproduced with permission.

Title of Print: ‘Scene in a new pantomime to be performed at the Theatre Royal Paris’ (London: Ackermann, published 12 April 1815)

In this lively and irreverent image, Thomas Rowlandson draws on the frequent use of theatre in satirical cartoons, and capitalizes on the function of the Romantic-period stage as a space for allusive political commentary. In particular, he employs the set characters and situations of the harlequinade, a form of entertainment based on the Italian commedia dell’arte that had been popular on the British stage since the early eighteenth century. Characterized by slapstick, gross humour, the inversions of norms and conventions, and magical transformations, the harlequinade was fraught with satirical potential.

The focus of this form, as well as Rowlandson’s picture, is Harlequin himself, who is usually possessed of magic powers enabling him to transform objects and thus change the turn of events (and, in 1815, these metamorphic tricks were the stock-in-trade of Joseph Grimaldi, the acclaimed ‘King of Clowns’). Rowlandson accordingly depicts Napoleon as a Harlequin who, after escaping from Elba, has set in train some sudden and dramatic transformations on the political stage of Europe, and is chased by a horde of antagonists bent on punishing him.

Among Napoleon's antagonists in this print is the obese King of Würtemberg, who is pictured on his knees and in the act of firing a pair of pistols at the puny anti-hero. The king’s posterior bears the word ‘Clown’, indicating that Napoleon’s magic trick has revealed the monarchs of Europe for what they really are.

Another grotesque pursuer is the Emperor of Austria, who wears a wallet in his belt inscribed ‘Pantaloon’. The only figures who are not identified with a character from the harlequinade, but rather as more generic stage types, are a fat Cossack (representing Russia) and Ferdinand VII of Spain, depicted as a ‘Don’ in slashed doublet, cloak and flapped boots. The latter image is particularly relevant because it stresses how durable stereotypical representations of Spanishness continued to be even after the wave of pro-Spanish feeling introduced by the early phases of the Peninsular War. It also confirms that, in early 1815, Spain still played a role in the theatre of European politics and diplomacy – a role it would lose after Waterloo and Vienna, when it became one of Europe’s ‘secondary courts’.

Finally, the print features another crucial figure from the harlequinade, that of Columbine, in the painting of a buxom woman with arms akimbo, which is being stolen by some anonymous hands (this female figure has been variously interpreted as Napoleon’s wife, Marie Louise of Austria, or the powerful Duchesse d’Angoulême).

Rowlandson’s print pokes fun at the Continent’s monarchs and a tottering ‘new’ order that is in chaos because of the unexpected interference of the troublesome little Corsican. By harnessing the arts of theatre and caricature, it conjures up a ‘carnivalized’ depiction of Europe at the start of the Hundred Days. Britain, however, is significantly excluded from this image, its satire being exclusively levelled at Continental powers. In addition, there seems to be some degree of sympathy for Napoleon and his mischievous ability to overturn the order imposed by the 1814 Treaty of Paris and cause havoc among the buffoon-like (old, though ostensibly new) rulers of Europe. Rowlandson represents his indictment of the Restoration also in the portrait/caricature of Louis XVIII (inscribed ‘Louis le Bien Aimé’), through which Harlequin Napoleon jumps out of the stage to safety. In this confused freeze-frame, the obese figure of the ‘beloved’ Bourbon, the grotesque features of his fellow monarchs, and the figure of the Pope holding an executioner’s axe, are all caught in a transitional and suspended position – between farce and tragedy – that transforms the light-hearted tone of the harlequinade into a pitilessly sarcastic denunciation of the disastrous state of post-Napoleonic Europe.