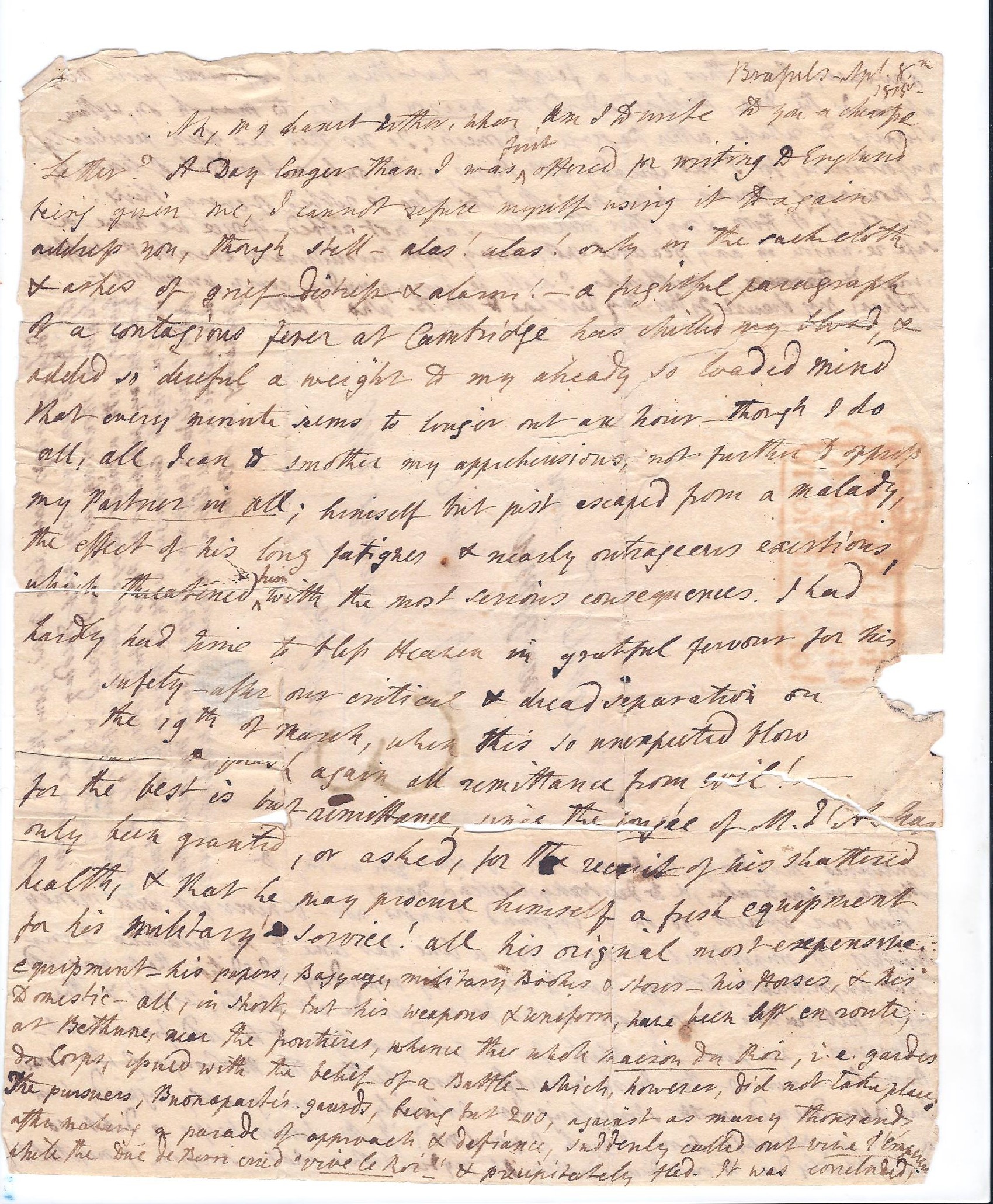 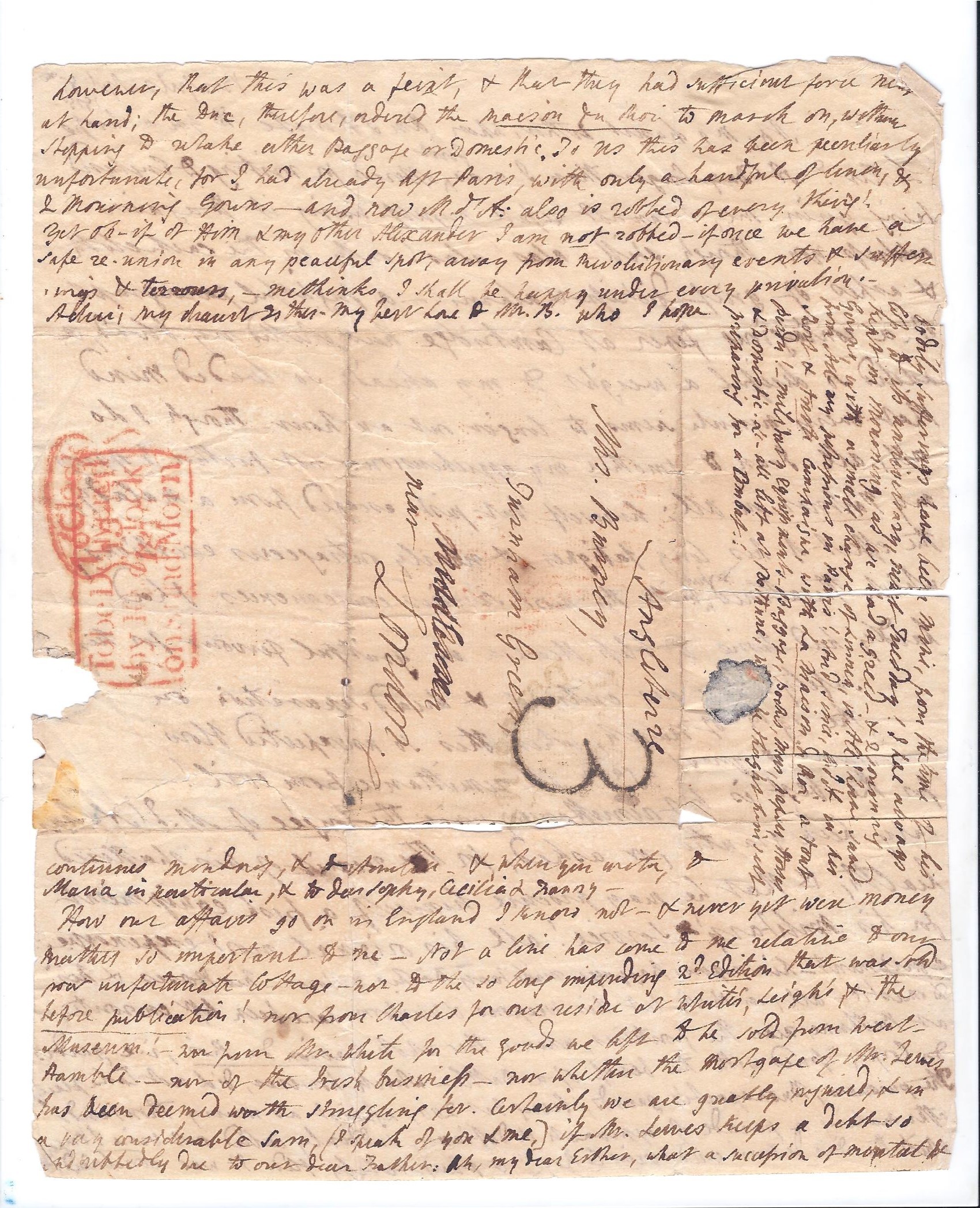 Madame d'Arblay on the disarray amongst the King's household guards

Fanny Burney was an extremely successful novelist in the 18th century. Her writing career began with 'Evelina', published in 1778, and her last novel, 'The Wanderer' was published in 1814. During the French Revolution she married Alexandre d’Arblay, a French émigré who had taken refuge in Britain. Once Louis XVIII was restored to the throne in 1814, the d’Arblays became part of the circle around the royal family in Paris. When, in March 1815, it became clear that Napoleon was heading for Paris, the d’Arblays were dramatically caught up in events, Alexandre as a member of the King’s household, and Frances as a royalist. Fanny’s letters to her son and to her sister in Britain give us an invaluable eye-witness account of the royalist reaction to Napoleon’s return.
In this letter from 8th April 1815, we learn of Fanny's hurried departure from Paris for Brussels, and how little she managed to take with her. She recounts how the troops of the King’s household, her husband amongst them, had expected to engage Napoleon’s forces but ended up fleeing instead, leaving behind both baggage and servants.
In the weeks that followed, Fanny remained in Brussels, where she eagerly awaited news of her husband’s well-being as he undertook a delicate mission to liaise with the Prussians on the King’s behalf. Fanny shares with her family anecdotes about Wellington, Blücher, and other leading figures in Brussels. Once war is imminent she prepares bandages for the inevitable casualties.
Fanny’s overriding concern in her correspondence of the spring of 1815 was for news. Her letters are full of her fear for the lives of those she loved and they highlight above all the interminable wait for information that was the lot of women whose menfolk were involved in war.

A transcription of the letter can be found by clicking on 'further information' below.

Brussels – April 8th 1815 –
Ah, my dearest Esther, when am I to write to you a chearful letter? A Day longer than I was first offered for writing to England being given me, I cannot refuse myself using it to again address you, though still – alas! alas! only in the sackcloth & ashes of grief – distress & alarm! – a frightful paragraph of a contagious fever at Cambridge has chilled my blood, & added so direful a weight to my already so loaded mind that every minute seems to linger out an hour – though I do all, all I can to smother my apprehensions, not further to oppress my Partner in All; himself but just escaped from a malady, the effect of his long fatigues & nearly outrageous exertions, which threatened him with the most serious consequences. I had hardly had time to bless Heaven in grateful fervour for his safety – after critical & dread separation on the 19th of March, when this so unexpected blow came to quash again all remittance from evil! – for the best is but remittance, since the congée of M. d’A has only been granted, or asked, for the recruit of his shattered health, & that he may procure himself a fresh equipment for his military service! all his original most expensive equipment – his papers, Baggage, military Books & stores – his Horses, and his Domestic – All, in short, but his weapons & uniform, have been left en route, at Bethune, near the frontières, whence the whole Maison du Roi, i.e. gardes du corps, issued with the belief of a Battle – which, however, did not take place. The pursuers, Buonaparte’s guards, being but 200, against as many thousand, then making a parade of approach & defiance, suddenly called out vive l’Empereur while the Duc de Berri cried ‘vive le Roi’ - & precipitately fled. It was concluded, however, that this was a feint, & that they had sufficient force near at hand; the Duc, therefore, ordered the Maison du Roi to march on, without stopping to retake either Baggage or Domestic. To us this has been peculiarly unfortunate, for I had already left Paris, with only a handful of linen, & 2 mourning gowns – and now M. d’A. also is robbed of every thing! Yet oh – if of Him & my other Alexander I am not robbed – if once we have a safe re-union in any peaceful spot, away from evolutionary events & sufferings & terrours, - methinks I shall be happy under every privation. –
Adieu! my dearest Esther – my best Love to Mr B who I hope continues mending, and to Amelia - & when you write, to Maria in particular, & to dear Sophy, Cecilia& Fanny –
How our affairs go on in England I know not - & never yet were money matters so important to me – Not a line has come to me relative to our now unfortunate Cottage – nor to the so long impending 2nd Edition that was sold before publication! nor from Charles for our residu at White’s, Leigh’s, & the Museum! – nor from Mr White for the goods we left to be sold from West-Humble – nor of the Irish business – nor whether the Mortgage of Mr Lewes has been deemed worth struggling for. Certainly we are greatly injured, & in a very considerable Sum (I speak of you & me,) if Mr Lewes keeps a debt so undoubtedly due to our dear Father: Oh, my dear Esther, what a succession of mortal and bodily sufferings have been mine, from the time of his loss, to its anniversary, next Tuesday! I had always kept in mourning, as we had agreed - & 2 mourning Gowns, with a small change of Linnen, is ALL I have saved from all my possessions in Paris! And, since, M. d’A in his short & triste Campaigne, with La Maison du Roi, a tout perdu! – military Equipments – Baggage, Books, Maps, papers, Horses & Domestic &c – all left at Bethune where he thought himself preparing for a Combat!