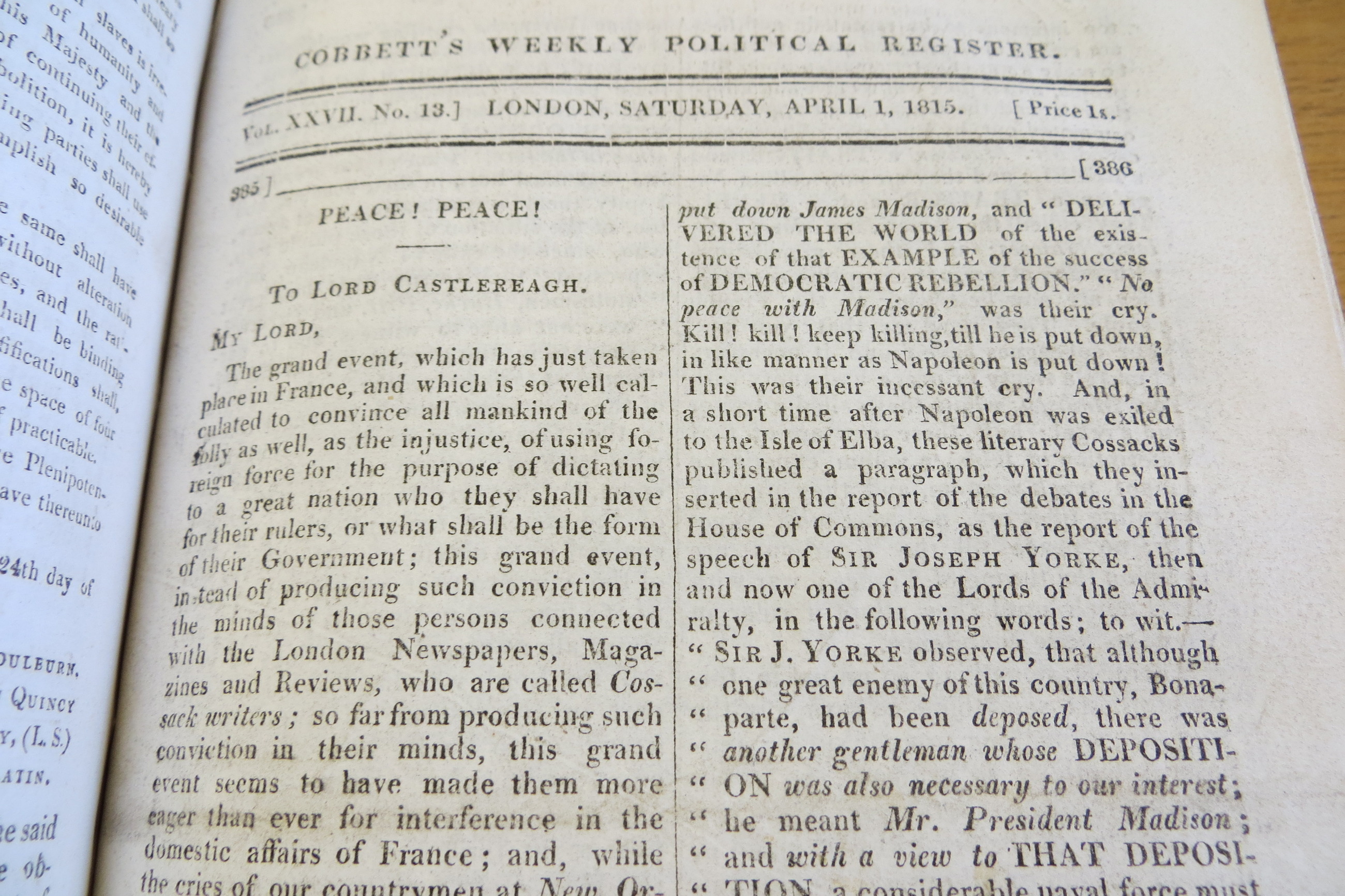 William Cobbett argued throughout the Hundred Days that the French people should be allowed to choose their own government and that Britain should not begin another war with Napoleon unprovoked. In this article, styled as an open letter to the British Foreign Secretary, Lord Castlereagh, Cobbett contends that Napoleon's return proved ‘the folly, as well as the injustice, of using foreign force for the purpose of dictating to a great nation who they should have for their rulers, or what shall be the form of their Government ... if he be not now fairly chosen by the people of France, never was man fairly chosen in this world'.

This document is remarkable in light of Cobbett’s previous commitment to the war against Napoleon. He opposed the Peace of Amiens in 1802 and on the resumption of hostilities he was commissioned by the government to write a rousing call to arms that was circulated to every parish in England and Wales. Within a few years, however, Cobbett began to question the justification for the war and the way it was being fought and funded. He also expressed qualified praise of Bonaparte and the liberal reforms he introduced, including the Code Napoléon.

William Cobbett began his career in Philadelphia during the 1790s, publishing fiercely anti-Jacobin journalism and pamphlets under the pseudonym ‘Peter Porcupine’. Setting himself up as a staunchly patriotic representative of ‘Old England’ – he was, he wrote, ‘a calf of John Bull’ – he denounced the revolutionaries in France, democrats in France and would-be reformers and revolutionaries in Britain and Ireland.

In 1800, Cobbett fled the United States following a libel conviction and was welcomed back to England by the ministry. Although he refused the editorship of a government paper, wishing to preserve his independence, Cobbett initially continued to support the loyalist cause and, above all, the war against Napoleon. In 1801, he opposed the negotiations with France that led to the Peace of Amiens and his house and shop were attacked when he refused to illuminate following the signing of the preliminaries to peace. During this truce, the French ambassador to London conveyed Napoleon’s personal complaints about Cobbett’s attacks (see George Spater, William Cobbett: The Poor Man’s Friend, 2 vols (Cambridge: Cambridge University Press, 1982), vol. 1, p. 125.)

On the renewal of hostilities, Cobbett was commissioned by the government to write a patriotic address, 'Important Considerations for the People of this Kingdom' (1803), which was circulated anonymously to every parish in England and Wales, ‘to be deposited in the pews and … distributed in the aisles, among the poor’ (‘CIRCULAR.—To the Officiating Ministers of the several Parishes in England and Wales’, Political Register, 30 July 1803, 129). In this address, Cobbett warned of the threat of invasion, using lurid descriptions of the depredations of Napoleon’s armies in Germany.

At this point, Cobbett was recognised as one of the leading exponents of loyalist rhetoric and might be seen as an embodiment of Linda Colley’s model of a belligerent, anti-French ‘Britishness’, created in the ‘Second Hundred Years’ War’ with France (See Linda Colley, Britons: Forging the Nation, 1707-1837 (London: Yale University Press, 1992), passim.). Within a few years, however, Cobbett’s views changed dramatically. As the threat of invasion receded, his focus turned instead to the funding of the war through loans that added millions to the National Debt and led to high inflation and taxation. Revelations about corruption in the army and government convinced him that the war was being fought not in the national interest but in the interests of a corrupt political and financial elite. He began to revise his view of Napoleon, praising him for bringing an end to feudal tyranny in France and abolishing the Inquisition in Spain. He also drew a favourable comparison between Bonaparte’s character and the behaviour of the British ruling class: ‘He is sober … His hours of recreation are not spent at the gaming table, but in the manly exercises of the field.’ (Spater, William Cobbett, vol. 2, p. 334) However, he condemned Napoleon’s personal ambition and believed that France would be better served by a republican government.

Following Napoleon’s abdication in 1814, Cobbett hoped for parliamentary reform in Britain, which could no longer be put on hold by war, but opposed the imposition of the Bourbons under Louis XVIII: part of an attempt to restore the old order across Europe. In 1815, Cobbett’s Political Register conveyed the excitement of unfolding events: on 11 March, Cobbett had time to add, as the paper was going to press, ‘BUONAPARTE IN FRANCE!!! (see the entry for 11 March). He wrote: 'This unlooked for and extraordinary occurrence was announced last night to the astonished inhabitants of the metropolis’. The following week he reflected that ‘LOUIS the desired has not done what was promised. He has not abolished the heaviest taxes; he has not left religion as he found it; he has not adhered to the Code of Napoleon; he has not left the press free’. Cobbett addressed the British government: 'I now beseech, I implore them, not, on any account, to draw the sword, to waste the treasure and pour out the blood of our beloved and long suffering country in this new quarrel.—We all now feel the sorrows of a twenty years war, in the taxes and troubles which have trod upon its heels … let who will be the Ruler, LET US HAVE PEACE WITH HIM.'

Over the following months, Cobbett argued that the French people must be allowed to choose their own government and Britain should not go to war with Napoleon unless attacked. Having been imprisoned for two years in Newgate following his conviction for seditious libel (1810-12), Cobbett was particularly concerned about press freedom in France and wrote that ‘when I heard of the landing of Napoleon, the first thought that came athwart my mind was, that now those men who had been imprisoned for LIBELS would be restored to freedom, an object worth, of itself, a little revolution’ (1 April). He continued to criticise the war after Waterloo: for example, in a further letter to Lord Castlereagh, published on 29 July, he responded to the celebrations of the loyalist press: 'The Courier says: “The play is over; let us go to supper.” … “The play” may be over; but, oh! no! we cannot “go to supper.” We have something to do. We have forty-five millions a year for ever to pay for the play. This is no pleasant thing. But, indeed, the play is not over. The first act is, perhaps, closed. But, that grand revolution, that bright star, which first burst forth in the year 1789, is still sending forth its light over the world. In that year, feudal and ecclesiastical tyranny, ignorance, superstition, received the first heavy blow: they have since received others; and in spite of all that can be now done in their favour, they are destined to perish.'

At one shilling, the Political Register was still prohibitively expensive for many potential readers. However, from November 1816, Cobbett exploited a loophole in the stamp duty laws and started issuing each week’s leading article as a single, unstamped sheet, which could be sold for two pence. His circulation increased by as much as tenfold to 50,000 copies a week and his arguments against corruption and in favour of reform reached a truly popular audience for the first time. Harnessing the mood of post-war discontent, the cheap Register – or ‘Twopenny Trash’, the name Cobbett took up from his opponents – played a vital role in the years of protest and agitation for reform that followed the end of the Napoleonic Wars, described by E. P. Thompson as ‘the heroic age of popular Radicalism’ (E. P. Thompson, The Making of the English Working Class (London: Victor Gollancz, 1963), p. 603).