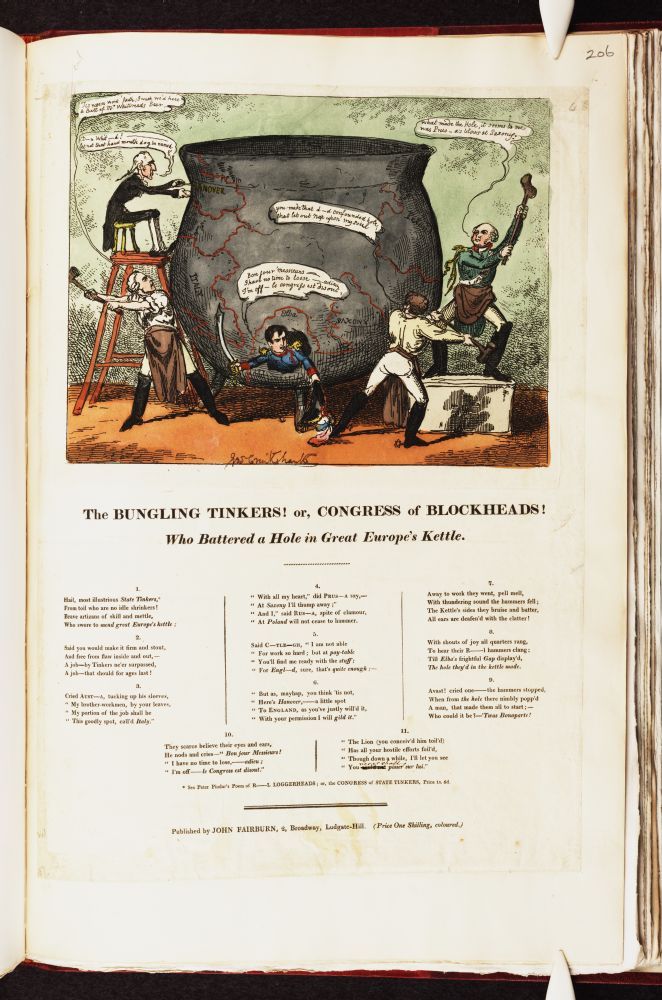 ‘The Bungling Tinkers! or, Congress of Blockheads! Who Battered a Hole in Great Europe’s Kettle’

In Fairburn’s broadside-cum-caricature, the great diplomats assembled at the Congress of Vienna hammer cracks in the iron pot of Europe; Napoleon emerges from a hole in the bottom. This scatological note is no reflection on the mischievous Corsican, however, who is depicted – by contemporary British standards – as young, slim, and vigorous, brandishing a sabre.

The lyrics below are in the style of society journalism, rather than popular balladry, with polite redactions of names such as Castlereagh that of course leave them wholly legible. This is high traditional Grub Street satire, lambasting the greed of Europe’s powers, and it comes with a troubling moral. Napoleon, formerly a byword in similar London productions for annexatory excess, appears as the Congress’ punishment; it is their tinkering, not his ambition, that causes his return.

A hasty final verse implying that the British Lion (as opposed to Britain’s statesmen) will save the day, is far from reassuring – despite its defiant final couplet.

Though the subject and form is that of high politics, the imagery – clumsy tinkers, a kettle, a mischievous faerie – is pure folklore. This is Napoleon as trickster, an appealing anti-heroic sprite. If the morality tale is clear, the print’s politics are more nebulous.

For a transcription of the song lyrics, click on further information.

The BUNGLING TINKERS! or, CONGRESS of BLOCKHEADS!
Who Battered a Hole in Great Europe’s Kettle.

1.
Hail, most illustrious State Tinkers,*
From toil who are no idle shrinkers!
Brave artizans of skill and mettle,
Who swore to mend great Europe’s kettle;

2.
Said you would make it firm and stout,
And free from flaw inside and out, -
A job – by Tinkers ne’er surpassed,
A job – that should for ages last!

3.
Cried AUST—A, tucking up his sleeves,
“My brother-workmen, by your leaves,
“My portion of the job shall be
“This goodly spot, call’d Italy.”

7.
Away to work they went, pell mell,
With thundering sound the hammers fell;
The Kettle’s sides they bruise and batter,
All ears are deafen’d with the clatter!

8.
With shouts of joy all quarters rang,
To hear their R---l hammers clang;
Till Elba’s frightful Gap display’d,
The hole they’d in the kettle made.

9.
Avast! cried one – the hammers stopped,
When from the hole there nimbly popp’d
A man, that made them all to start; -
Who could it be? – ‘Twas Bonaparte!

10.
They scarce believe their eyes and ears,
He nods and cries – “Bon jour Messieurs!
“I have no time to lose, - adieu;
“I’m off – le Congress est disout.”

11.
“The Lion (you conceiv’d him toil’d)
“Has all your hostile efforts foil’d,
“Though down a while, I’ll let you see
“You could not never shall pisser sur lui.”