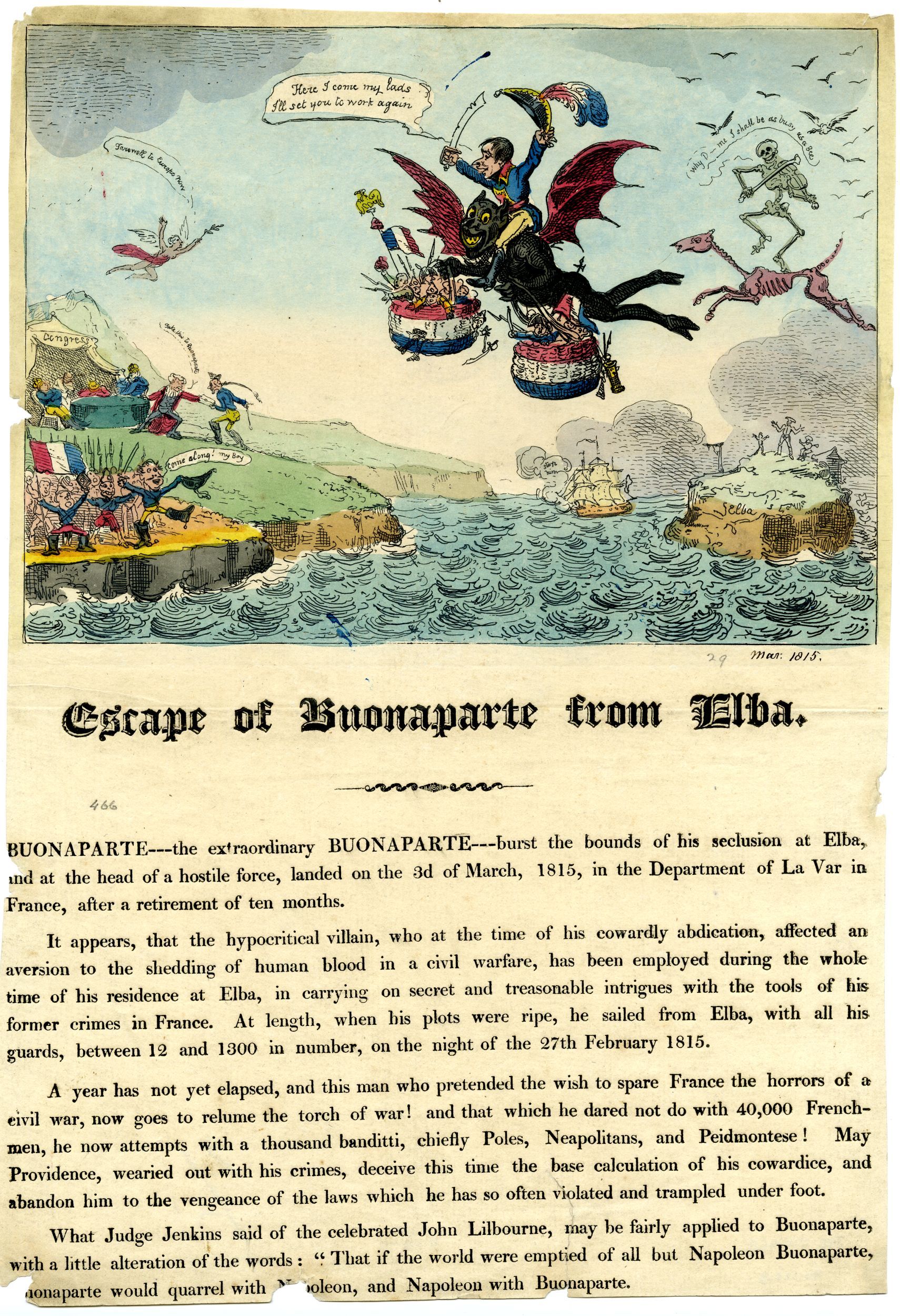 Source: © Trustees of the British Museum; reproduced with permission.

Cruikshank’s ‘Escape of Buonaparte From Elba’

When Napoleon made his remarkable return from Elba, British caricaturists responded with an outpouring of prints noticeable for their vibrancy.

Far from embodying straightforward anti-Napoleonic propaganda, the numerous prints that George Cruikshank produced at this time exhibit the same mischievous ambiguity that had defined the work of his hero James Gillray – and in this one there is considerable discrepancy between text and image.

The text appears to be a sincere attack on Napoleon, the ‘hypocritical villain’ who cowardly abdicated, affected an aversion to shedding blood, carried out ‘secret and treasonable intrigues’ and then returned to ‘relume the torch of war’. Like much anti-Napoleon material, the Corsican usurper’s name is spelt in its original form with the inclusion of the ‘u’, a technique which helped to distance Napoleon from the French, emphasising his illegitimacy. The text goes on to mention the Polish, Neapolitan and Piedmontese banditti who made up Napoleon’s latest army, reinforcing Bonaparte’s dubious non-French ‘Otherness’.

But by contrast, Cruikshank’s illustration to this broadside is disarmingly jovial; its forecast of apocalyptic war is quaintly hyperbolic. Alluding to Napoleon’s continued popularity (which was crucial for those arguing in favour of Bonaparte’s legitimacy as a ruler), Cruikshank’s print also takes delight in Bonaparte’s interruption of the restoration of traditional monarchy in Europe. This print exemplifies many of the mixed emotions felt by the British public towards the return of ‘the extraordinary Buonaparte’.

For all the mockery that the infamous Corsican bugaboo attracted, British print-makers and consumers were obsessed with Napoleon throughout his reign and beyond, with certain prints betraying an admiration for him, sometimes begrudgingly so, or even stronger emotions such as sympathy.

Thomas Rowlandson, William Heath, George Cruikshank and James Gillray all produced prints which charted Napoleon’s extraordinary journey from his relatively humble beginnings to becoming the dominant personality in Europe. Though they were often critical and unflattering caricatures, such prints provided an entertaining and accessible history of the man. Most other caricature victims appeared exclusively in single-sheet satires focusing on the particular issue of the moment, rather than stage-by-stage summaries of how the individual arrived at his or her present position.

Napoleon’s presence as this proto-comic strip hero/anti-hero discloses some of the awe felt towards the undeniably talented general who had achieved his power and status through personal merit rather than effortless inheritance.

Images: The Progress of the Emperor Napoleon [Thomas Rowlandson. 19 November 1808]
Democracy; - or - a Sketch of the Life of Buonaparte [James Gillray. 12 May 1800]

More mischievous were those prints, pioneered by James Gillray and imitated by others, that cast Napoleon - not as a diminutive Lilliputian, as is sometimes mistaken - but as Jonathan Swift’s hero Lemuel Gulliver visiting the land of Brobdingnag. Here Napoleon became a rather plucky underdog subjected to the torment of the ogre-like British royals. As James Baker has argued, in these Swiftian designs the royals and their circle ‘are not representative of the majority looking down upon Napoleon, rather Napoleon-cum-Gulliver represents the majority looking up to them’, while the prints double as a critique of the elite’s ostensible need for playthings and fripperies, particularly in wartime.
Images: The King of Brobdingnag, and Gulliver [James Gillray. 26 June 1803]

Subsequently, prints depicting Bonaparte’s banishment to Elba in 1814 did so with a mixture of humour and pathos, imagining the ‘great man’ reduced to sitting, weeping on a tiny rock, greeted by gross locals, striving to rally an army out of this imbecilic population, or desperately and insanely playing toy soldiers with straw. It was probably The Sorrows of Boney or a print very much like it that John Scott (1783-1821) described as having ‘a very touching character’, due to the ‘great disproportion between the size of the place and of its inhabitant’.

Napoleon’s dramatic return from Elba added yet another barely-believable, legend-like element to his incredible story, stimulating many prints noticeable for their electricity. A prolific etcher of these was George Cruikshank who depicted Bonaparte rising from flames like a phoenix, unceremoniously booting Louis XVIII from his throne, and on more than one occasion bursting through a door or window to interrupt the burlesqued rulers of Europe in the act of dividing territory in his absence.

Images: The sorrows of Boney, or meditations in the island of Elba!!! [15 April 1814]
Boneys return from Elba-or the devil among the tailors [George Cruikshank. 21 March 1815]

George Cruikshank’s Elba prints contain a palpable aura of excitement at the return of ‘Boney’. Part of this might have been financial thrill; the caricaturist’s relief at the return of the person whose image had sold so consistently well in recent years. It is possible that Cruikshank’s conscious or subconscious mind may also have been tapping into the emotions he had personally experienced when his brother Robert went missing at sea in 1804 and was declared dead, only to arrive home safely two years later, much to the surprise of his mourning family.
Sometimes aided by the Devil but evoking the phoenix, Prometheus, Orpheus, Lazarus and even Christ, Napoleon flickers between the role of hero and villain in such pieces. The disturbance of the European monarchs, whose self-satisfied laurel-resting has been disturbed to their shocked and horrified amazement by their adversary’s sudden return, has been etched with an infectious glee.
Even in the prints which use Cruikshank’s caricatures as accompaniments to anti-Napoleon verses, the artist emphasises the dubiousness of the restored Louis XVIII and other participants in the Congress of Vienna, as well as the continuing (or renewed) popularity of Bonaparte in the eyes of the French.
In John Bull in Alarm the verses describe Bonaparte as a satanic ‘thief’ who should be caught and skinned like an eel, yet Cruikshank’s picture shows the obese Louis XVIII, grasping a pouch of ‘Jewels, Precious Stones, &c &c’, kicked by Napoleon from his throne towards representatives of ‘England’, ‘Russia’, and ‘Prussia’. On the left, joyous Frenchmen cheer their hero, whereas on the right, John Bull consoles the Bourbon, ‘Cheer up old Lewis for as fast as he kicks you down we’ll pop you up again.’ Given the unflattering caricature of Louis, this statement reads more ominous than triumphant, channelling the unease that was felt by many in Britain towards the prospect of Bourbon restoration.
Image: John Bull in alarm; or, Boney's escape, and a second deliverance of Europe [George Cruikshank. c. April 1815]

5) Escape of Buonaparte From Elba

In the bottom left of his picture, Cruikshank has included a mass of celebrating Frenchmen, signifying Napoleon’s continued popularity. This popularity was a crucial factor in British debates over the Emperor’s legitimacy. Supporters of Napoleon could cite his popularity, while perhaps also alluding to the relative unpopularity and arguable illegitimacy of British rulers, particularly the Prince Regent. As Stuart Semmel has shown, arguments over Napoleon’s contested legitimacy often reflected very badly on Britain’s own leadership. Since the Glorious Revolution and Hanoverian Succession, the British monarch owed its position to parliamentary support which some saw as virtually akin to the popular election of a monarch. And the Hanoverians owed their crown to an illicit landing of troops, much like Bonaparte’s surprise return. These episodes, argued radicals, undermined the British Regent’s claims to fight on the behalf of ‘hereditary legitimacy’. By defending the hereditary Louis XVIII against the more popular Napoleon, the Regent ‘would chip away at the very principle that had installed his own family on Britain’s throne’. For men such as William Hazlitt and William Hone (the latter was friends and collaborated with Cruikshank), Napoleon was adopted as a symbol of liberty against the ancien régimes of Europe.

Setting the tone of Cruikshank’s illustration from its centre flies that grinning demon figure who looks disarmingly jolly and amiable as he transports Napoleon back to Europe. The picture features skulls, skeletons and allusions to apocalyptic war, all very threatening symbols, but to whom? They are flying towards that group of complacent European monarchs on the left, asleep at their table during their congress. Are they about to get their comeuppance? Back in Elba, meanwhile, stand empty gallows and three small figures registering astonishment at the absence of their intended victim. This scene recalls accounts of eighteenth- and early nineteenth-century criminals who, usually through the failure of the hangman or his equipment, managed to momentarily escape their execution, and in doing so won over the support of the assembled crowd, irrespective of his or her crime. With Cruikshank tapping into cultural traits such as this, and given Napoleon’s caricatural history, the sight of Bonaparte’s miraculous escape from his own supposedly conclusive fate was likely to have provoked cheers as well as jeers from London’s printshop window crowds.
Image close-up
Return to page