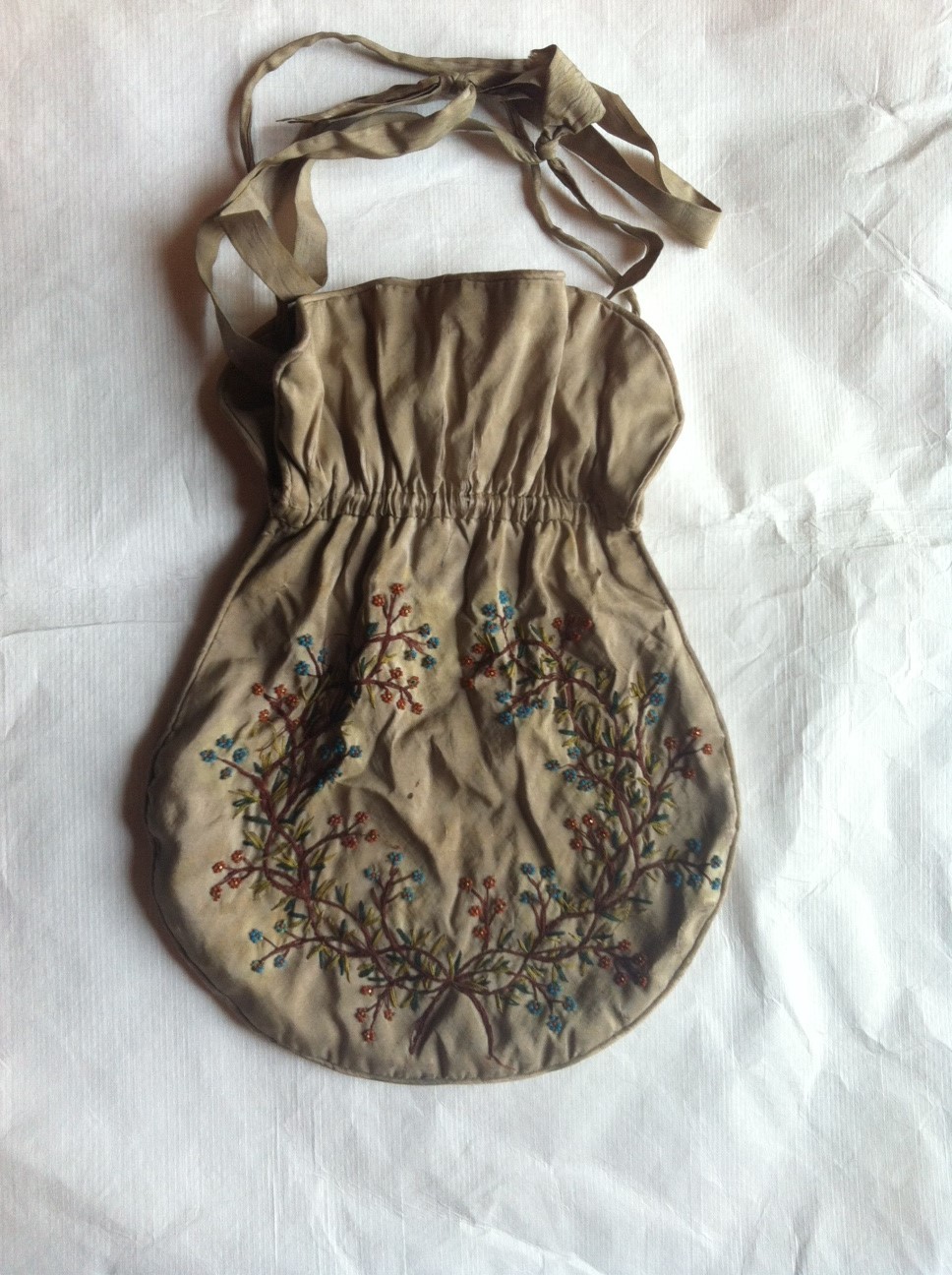 Source: Apsley House, with the permission of English Heritage.

This silk bag belonged to Kitty, Wellington’s much-maligned wife, and the great-great-great- grandmother of the writer of this text. It is likely that she kept keys in it, but the contents could have included miniature portraits of her husband and two sons, whom she doted on.

As the wife of the British Ambassador, she dutifully stayed on in Paris after Wellington left for the Congress of Vienna. News of Napoleon landing on French soil reached Paris on March 5th, though the French Government kept it secret until the 7th, when the King of France proclaimed him a ‘Traitor’. When Kitty heard of Bonaparte’s escape from Elba, though she may have privately voiced some concern, she doubtless publicly put on a brave face, not wishing to let her husband down.

However panic did spread amongst the English community, with reports in the press of ‘confusion and terror on every English countenance’ and distressed crowds of English in Calais, desperate to get a passage over the Channel. Every boat in Dover took part in the evacuation.

Eventually Kitty left Paris at 6 o’clock on the evening of Friday, March 10th. Such were the rumours swirling around, that it was falsely reported that she carried the French Crown jewels with her.

For more on Wellington's marriage, click on further information below.


[editors' note: to find out who did smuggle the French Crown Jewels out of France, see the entry for 18 March.]

Wellington’s marriage is always described as disastrous, but I would pose the question: for whom was it a disaster? His bad relationship with Kitty enabled Arthur to focus single-mindedly on his career, particularly during the Peninsular War, when he was away for five long years and rarely thought of home. The marriage was certainly a disaster for Kitty, who yearned for the contentment of a successful union.

On a personal level their story is a sad one, for they had a romantic courtship when they were both in their early twenties, and Arthur plucked up the courage to ask for Kitty’s hand. However, the Pakenhams saw no reason to throw away the pretty sought-after Kitty on a penniless young officer, who seemed to have few prospects, and twice they turned down Wellesley’s marriage proposal. Arthur went off to India in 1796 with a heavy heart, but a determination to make something of his life.

The couple were forbidden to write to each other, but sometime in 1801 a letter reached Arthur from a mutual friend of his and Kitty’s, a matchmaking Mrs Sparrow, who was intent on rekindling the romance between her friends. Though none of the letters were directly from Kitty, there followed four years of tormented correspondence, and by the time Arthur set foot back on English soil he had decided to try again. This time the Pakenhams were susceptible to his proposal, and why would they not be. He had returned home as a Major-General, been honoured with a knighthood by George III, and now Wellesley’s purse was full of the rewards of his military success.

Rashly, Arthur decided it was not necessary to go over to Dublin to see his intended, despite her begging him to do so: he was more intent on furthering his career. So the first sight Arthur had of Kitty for over ten years was at their Dublin wedding in April 1806. It is said that he was shocked by her appearance. Certainly she was not the young girl he had lost his youthful heart to. Furthermore, the change in Arthur’s situation and circumstances was dramatic, whereas Kitty’s world was very much as it had been when last he saw her.

Scarcely had their vows been solemnised, than Arthur was back in England, champing at the bit to be off to the battlefield – for if Kitty had a real rival it was the army. Remarkably, given that at the time of the wedding she was already thirty-four, (Arthur was thirty-six), she produced within the first two years of their union two boys – the heir ‘little Arthur’, and the crucial spare ‘Charlie’.

The boys would be her great solace in life. But even before the start of the war, the marriage had suffered its first fracture, brought on by Arthur’s intolerance of Kitty’s inability to manage her finances, and the growing realisation that he had married the wrong woman.

During the Peninsular War, Kitty suffered more than many other wives in the same situation, for Arthur rarely wrote to her about anything other than practical requests for her to send out supplies like tea, or warm blankets, or a particular book he might want. She was often the last to know about his triumphs or tribulations, and the effect was to turn her further away from the adult world and back to her children. Unquestionably she suffered from depression, and dark introspective thoughts, that even lead to her contemplating suicide. She wrote diaries for a lot of the time that her husband was away, and for me the most poignant entry is ‘Alone and Sad’.

When the war was over, and Wellington became British Ambassador in Paris, Kitty was overjoyed to be asked whether she wished to accompany him. She wrote back to her husband - ‘To an Ambassador’s wife there are no difficulties which I do not feel myself equal to overcome, no duties which I am not willing to perform and may I venture to add that you shall never have reason to regret having allowed me, on this subject, to decide for myself’. The fact that she stayed on in Paris after Wellington left for the Congress of Vienna is testament to her commitment to her role.

However, any optimism Kitty may have had for the future was short-lived. After Waterloo the nation claimed their hero, and Wellington’s fame ensured that he would never be able to retire into a private life; nor did he want to. The military man gave way to the statesman, culminating with a term of office as Prime Minister. Many considered that Kitty was not a suitable consort for the duke. Wellington likely shared this view, and found his wife’s adoration of him deeply irritating.

Separation was the pattern of their union: their rooms in both their country and London homes were far away from each other, and Kitty rarely featured in his rounds of engagements, whether private or public.

Not long after Wellington was thrown out of office for his opposition to Parliamentary reform, Kitty became seriously ill, and for the first time in their twenty-five-year marriage, Wellington became the devoted husband. I suspect this was more to do with conscience than affection, but whatever the motive, it meant that Kitty died, in April 1831, with her hand held by the man she claimed to have loved since she was fifteen.

After Kitty’s death, Wellington could easily have married again - he was certainly not short of admirers. But it suited him to be independent, and during the rest of his life he formed a number of close and confiding friendships with women. If the Pakenhams had not turned down the young Arthur Wellesley’s proposal, maybe he and Kitty would have had a marriage based on mutual respect and friendship, as they developed together. But then the course of history might have been very different.

'Wellington: A Journey Through My Family' by Jane Wellesley is published by Weidenfeld and Nicolson.