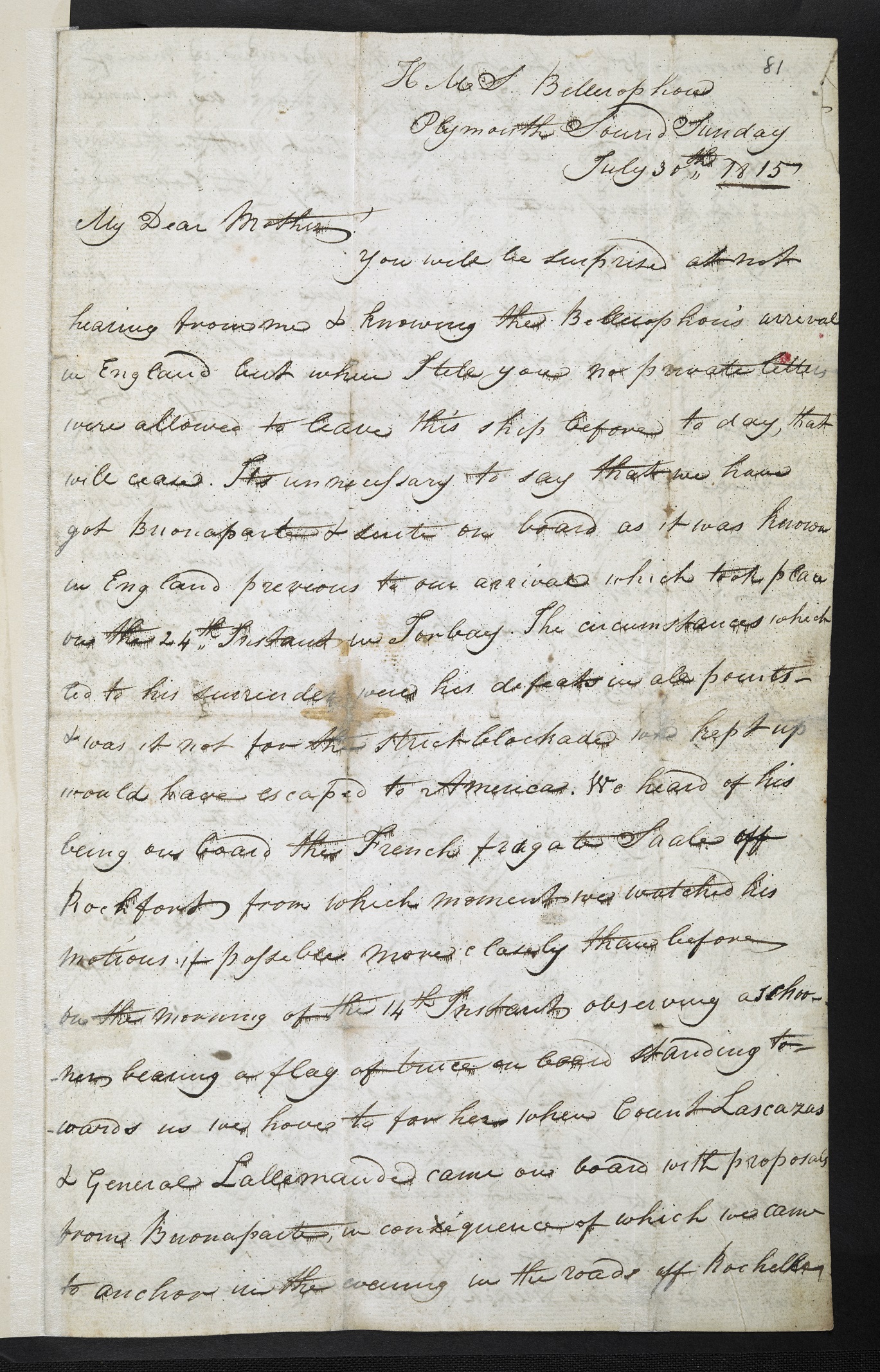 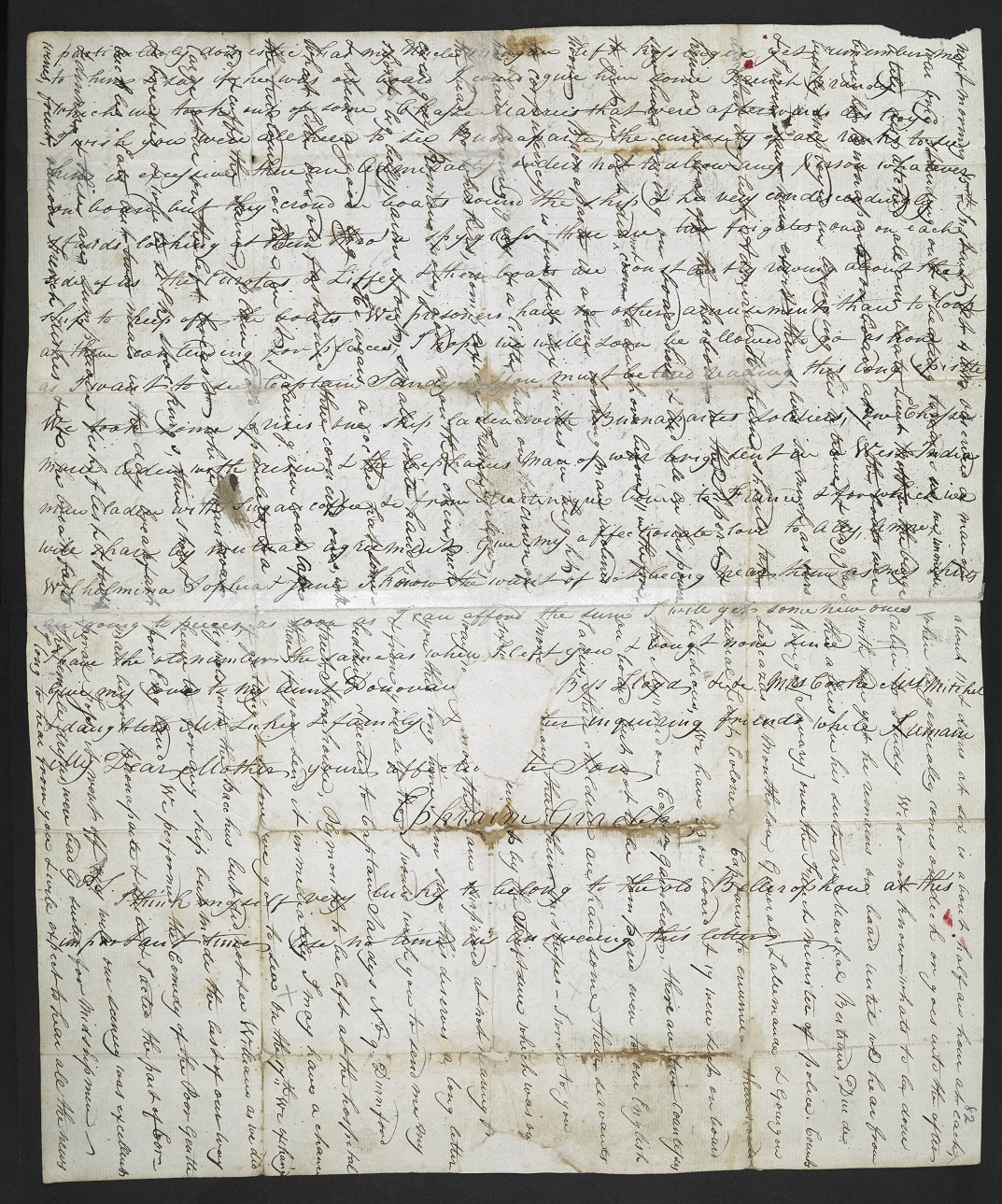 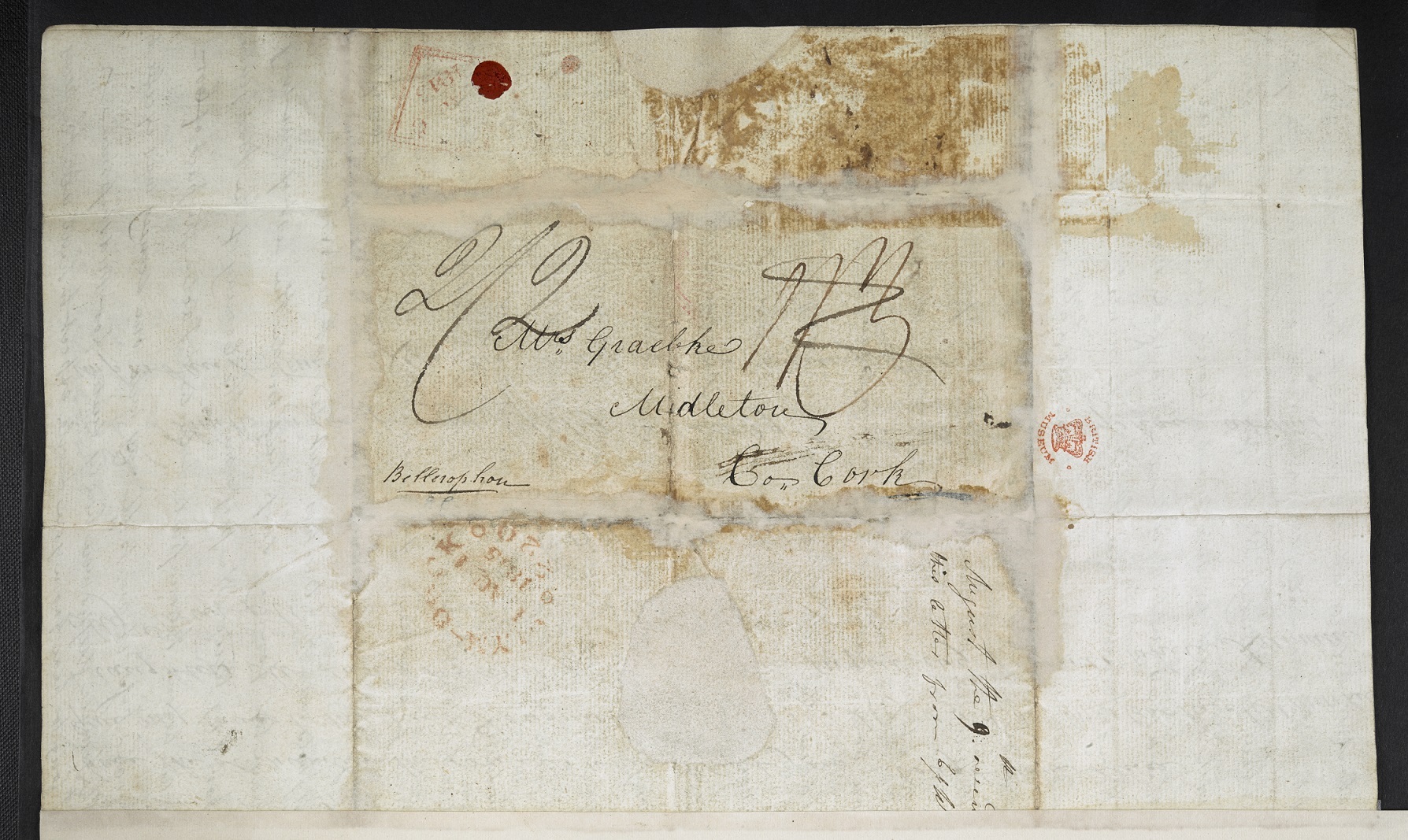 Source: © The British Library Board, Add. 34710 L. Reproduced with permission.

Life on board the Bellerophon with Napoleon

This letter was sent from the HMS Bellerophon’s assistant surgeon Ephraim Graebke to his mother and recounts in detail Napoleon’s arrival on board, and his daily routine on the crossing to Britain. Although the Bellerophon had arrived in Plymouth 26th July, it was kept isolated, with the crew forced to remain on board and no private letters were allowed to be sent from the ship until 30th July.

In order to cram as much information as possible into the letter, Graebke wrote both vertically and horizontally, a common technique at the time for saving paper. Thanks to his letter, we know what Napoleon was eating on board and we also have more information about the shipboard theatricals put on for his entertainment (see entry for 18th July). We can only imagine the comic effect of the female dresses which were ‘badly suited for Midshipmen’. His description of the scene in Plymouth Sound is very close to the scene depicted in a print of the period (see the link bottom left to 'Bonaparte on board the Bellerophon off Plymouth' (1816).

Despite being ‘imprisoned’ on the ship, unable to leave and land in port until arrangements had been made for Napoleon to be transferred to the Northumberland for transportation to the Island of Saint Helena, Graebke nevertheless felt himself ‘very lucky to belong to the old Bellerophon at this important time’.

For a transcription of the letter, see Further Information

HMS Bellerophon, Plymouth Sound, Tuesday, July 30th, 1815
My dear Mother,
You will be surprised at not hearing from me and knowing the Bellerophon’s arrival in England, but when I tell you no private letters were allowed to leave the ship before to-day, that will cease. It’s unnecessary to say that we have got Buonaparte and suite on board, as it was known in England previous to our arrival, which took place on the 24th instant in Torbay. The circumstances which led to his surrender were his defeats in all points, and was it not for the strict blockade we kept up would have escaped to America. We heard of his being on board the French frigate Saale off Rochefort, from which moment we watched his movements if possible more closely than before. On the morning of the 14th instant, observing a schooner bearing a flag of truce on board standing towards us, we hove to for her, when Count Lascazas and General Lallemande came on board with proposals from Buonaparte, in consequence of which we came to anchor in the evening in the roads off Rochelle. Next morning, 15th instant, at 4 A.M. observed a man-of-war brig standing out and beating towards us, we immediately dispatched all our boats. Lieut. Mott in the barge brought Buonaparte on board at 7, the boats were busily employed in bringing his retinue and baggage, and I never saw men exert themselves so much as ours did that day, lest Admiral Hotham should take him, as he was off the harbour in the Superb, and saw him coming on board here, and did all in his power to get in, but did not come to anchor before 11 in the forenoon. Buonaparte is a fine-looking man, inclined to corpulency, is five feet six inches in height, his hair turning grey, and a little bald on the crown of the head, no whiskers, complexion French yellow, eyes grey, Roman nose, good mouth and chin, neck short, big belly, arms stout, small white hands, and shews a good leg. He wears a cocked hat somewhat like our old-fashioned three cornered ones, with the tricoloured cockade in it, plain green coat, cape red, and cuffs the same, plain gold epaulets and a large star on the left breast, white waist-coat and breeches and white silk stockings, thin shoes and buckles. Eats but two meals in the day, breakfast and dinner, and these are sumptuous, fish, flesh, and fowl, wines, fruit, various French dishes &c. &c. He breakfasts about eleven and dines at six, is about half an hour at each, when he generally comes on deck or goes into the after-cabin to study. We do not know what’s to be done with him yet, he remains on board until we hear from the allies. In his suite are Marshal Bertrand, Duc de Rovigo once the French minister of police, Counts Lascazas and Montholon, Generals Lallemande and Gourgou, several Lieut.-Colonels and Captains, to enumerate them would be tedious. We have 33 on board, 17 were sent on board the Myridon, Captn. Gambier. There are two Countesses on board, but not to be compared even to our English ladies. Their children are handsome... We performed the comedy of the ‘Poor Gentleman’ before Buonparte and suite. I acted the part of Corporal Foss. It went off very well, our scenery was excellent. The female dresses were badly suited for Midshipmen. I long to hear from you and will expect to hear all the news... I wish you were all here to see Buonaparte, the curiosity of all ranks to see him is excessive. There are Admiralty orders not to allow any person whatever on board, but they crown in boats round the ship and he very condescendingly stands looking at them through a spyglass. There are two frigates, one on each side of us, the Eurotas and Liffey, and their boats are constantly rowing about the ship to keep off the boats. We prisoners have no other amusement to look at them contending for places. I hope we will soon be allowed to go ashore, as I want to see Captain Sandys. You must be tired reading this long epistle. We took some prizes, one ship laden with Buonaparte’s soldiers, one chasse maree laden with resin, and the Cephalus man-of-war brig sent in a West Indiaman laden with sugar, coffee, &c. from Martinique bound to France, and for which we will share by mutual agreements. Give my affectionate love to Ally, Anne, Wilhelmina, Sophia and Jane. I know the want of not being near them as my shirts are going to pieces, as soon as I can afford the sum I will get some new ones. I have the old number the same as when I left you and bought none since... I remain, my dear mother, your affectionate son,
Ephraim Graebke
P.S. I think myself very lucky to belong to the old Bellerophon at this important time. Lose no time in answering this letter.