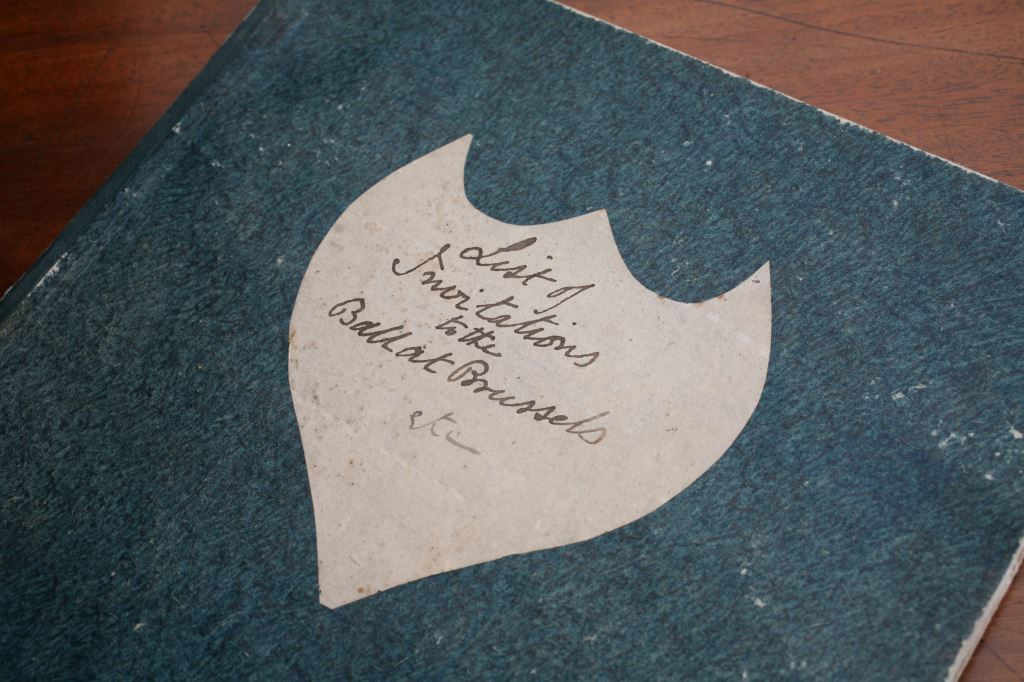 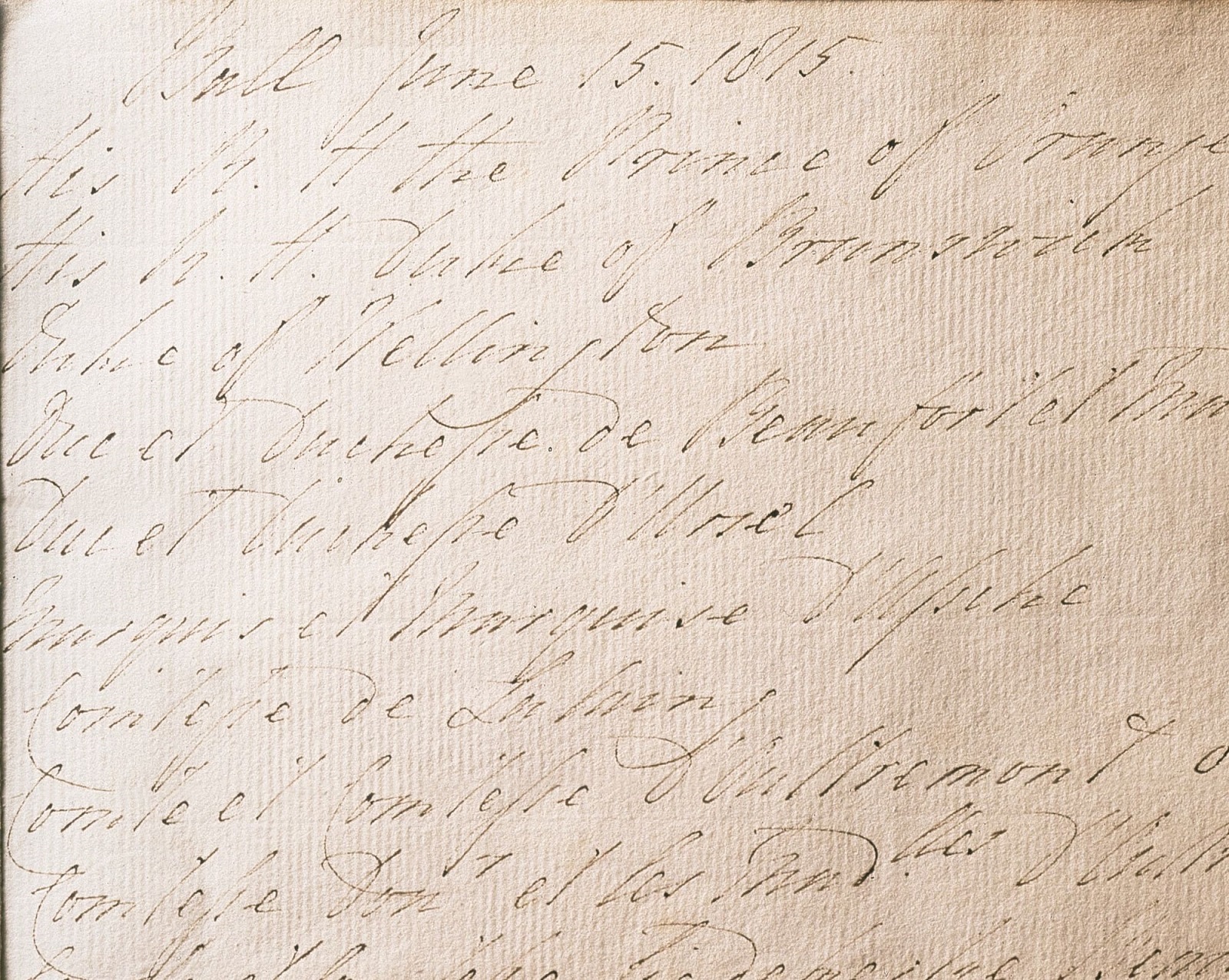 Source: The Guest List for the Duchess of Richmond's ball
By permission of the Trustees of the Goodwood Collection

© The Trustees of the Goodwood Collection

Claire de Duras and the Duchess of Richmond's Ball

On 16th June 1815, Claire de Duras wrote to Germaine de Staël from the royal camp in Ghent. The letter – translated in 'Further Information' – continually oscillates between the personal and the political, and offers a unique perspective on current events and the figure of Napoleon.

From its content, we must assume that the letter was composed in two stages. The pessimistic first part appears to be written before news of the events which had taken place at the Duchess of Richmond's ball the previous night had reached Ghent: it was at this ball in Brussels that the Duke of Wellington received the news that Napoleon had crossed into the United Kingdom of the Netherlands (now Belgium).

The second part, added later, completes the letter by offering a lively description and response to those events.

Today's object is the Duchess of Richmond's list of invitees to the ball; the original letter from de Duras is now lost. The Comte d’Haussonville, in his work on 'La Baronne de Staël et la Duchesse de Duras' (Paris: Figaro, 1910) published a transcript of it, mentioning in the paratextual material the famous fictional depictions of the Duchess of Richmond’s ball: Byron’s portrayal in Childe Harold, Thackeray’s in Vanity Fair.

However, this almost eye-witness account captures not only the frenzied events of that night, but also the fear that the war had produced, the return to previous uncertainties that it evoked, and the personal suffering that it caused. The swift change of tone in Duras’s letter between the two parts portrays the ball as a great turning point in the narrative of the 100 Days.

Oh, you are right to reproach me! It is inexcusable to not have responded to your original letter. My first thought when I arrived in Brussels was actually to write to you. I felt the need to be close to you again, and to talk to you about what was on my mind, but, then, I became so miserable! I lost the best mother: she loved only me and I was her sole concern in life.

She had wanted to follow me to Belgium without thinking about her age or her health. A fatal stroke took her from me in an instant! At five o'clock, she was cheerful and happy; at eight o’clock, she was no longer with us. I cannot describe to you the depths of sadness, of despondency, that her loss has plunged me in. I cannot tell you how a void has opened up around me, and how I have blamed myself for having brought her here, as it has transformed all other sorrows. I could no longer say the same things to you, and I would not have dared reveal myself as so sad and so incapable of talking about what would have interested you: the current events.

I came here, and for two months, I have done nothing. I barely write to Mme de La Tour du Pin; I write to no one. There is so much to say, and now the scene is changing, as hostilities began yesterday between Mauberge and Mons. Napoleon fired the first shots of the canons. We don’t know any of the details as the courier, who arrived at two o'clock that night, left when the action began. I think that the outposts will be retaken, like always happens. It will be seen as a victory for France, and will be worth thousands of conscripts for the Empire.

I don't think that we will stay here with the war. There is already talk of going to Antwerp. M. de Talleyrand has not yet arrived and we’re waiting for him to say the word. Unfortunately, now the question rests upon the shots of a canon. Certainly for me, the war and our poor country’s misfortunes are tearing at my heart. It pains me to think of what I shall gain through such means, and that, only through war, I am condemned to have my life back. At this price, I could be tempted to not want it, but, at least like Pilate, I declare myself innocent from the blood of the righteous – and yet what other choice do we have? Without fighting, France will remain in the hands of a man who has not changed, because people don’t change. He will be a tyrant, the conqueror of an occupied land! This is the product of our madness, of our light touch, and of our unforgivable lack of foresight.

Your daughter’s marriage has been put on hold then; Mathieu even said to me that it had broken down. In your place, I would not worry about someone, who could not sacrifice the advantages of a large fortune for your lovely Albertine. To be worthy of her, he must love her more. Pascal once said that after knowing everything, one returns to ignorance. And I find that after having seen the world and its people, one returns to the novels read during youth. Books still hold the best possibilities; illusions for illusions, they provide more happiness.

Here's the latest. Bonaparte crossed the Sambre at Thuin and seized Charleroi. There, he found a Prussian regiment who fought back well; there was fighting in the streets. The news arrived in Brussels during a ball given by the Duchess of Richmond. Although everything should have been prepared, no one waited around, not even the Duke. In an instant, the room was deserted: the young people lined up and, from there, left for the war. By midnight, they had all gone. People surrounded the Duke; the aides-de-camps carried his orders. Up and down the stairs, people were whispering and rumours spread. The Duke himself left at three o'clock in the morning.

Bonaparte has one hundred thousand men. He wanted to separate the English army from the Prussian army. They say that was his play. He has one hundred thousand Prussians in front of him and one hundred thousand Englishmen on his left flank. Plus, there’s fifty thousand Bavarians led by Wrede at Mézières. On 25 March, he knew that he would have to face all the allies at once. He wanted to warn them, so as to give himself the advantage of the attack. Perhaps, he was going to act like Gribouille, who threw himself in the water from fear of the rain, but he doesn't possess that kind of subtlety. He has led very competently since his return, and, in my opinion, he has not put a foot wrong.

Adieu madame! Please write to me and send your letters to Mme de Jaucourt at the office of Foreign Affairs. Don't tell anyone that I'm here.

I'm thinking about going to Switzerland very soon. And yourself, what are you doing?

P.S. The last time that I saw the Duke of Wellington, he asked for news of you and charged me with sending a thousand wishes to you. I am very serious about my plan to go to Switzerland that I just mentioned. There, I will see you and it will make me happy. I am very much inclined to enjoy your company; I have admired you for years and wanted to tell you. But I do fear you, and it is not for any reason that you could guess. Some day, we will discuss it, but, in the meantime, think about me and be kind to me. René talks a lot about you. I hope that one day it will be useful for his cause. The little good that has been done here is down to him.