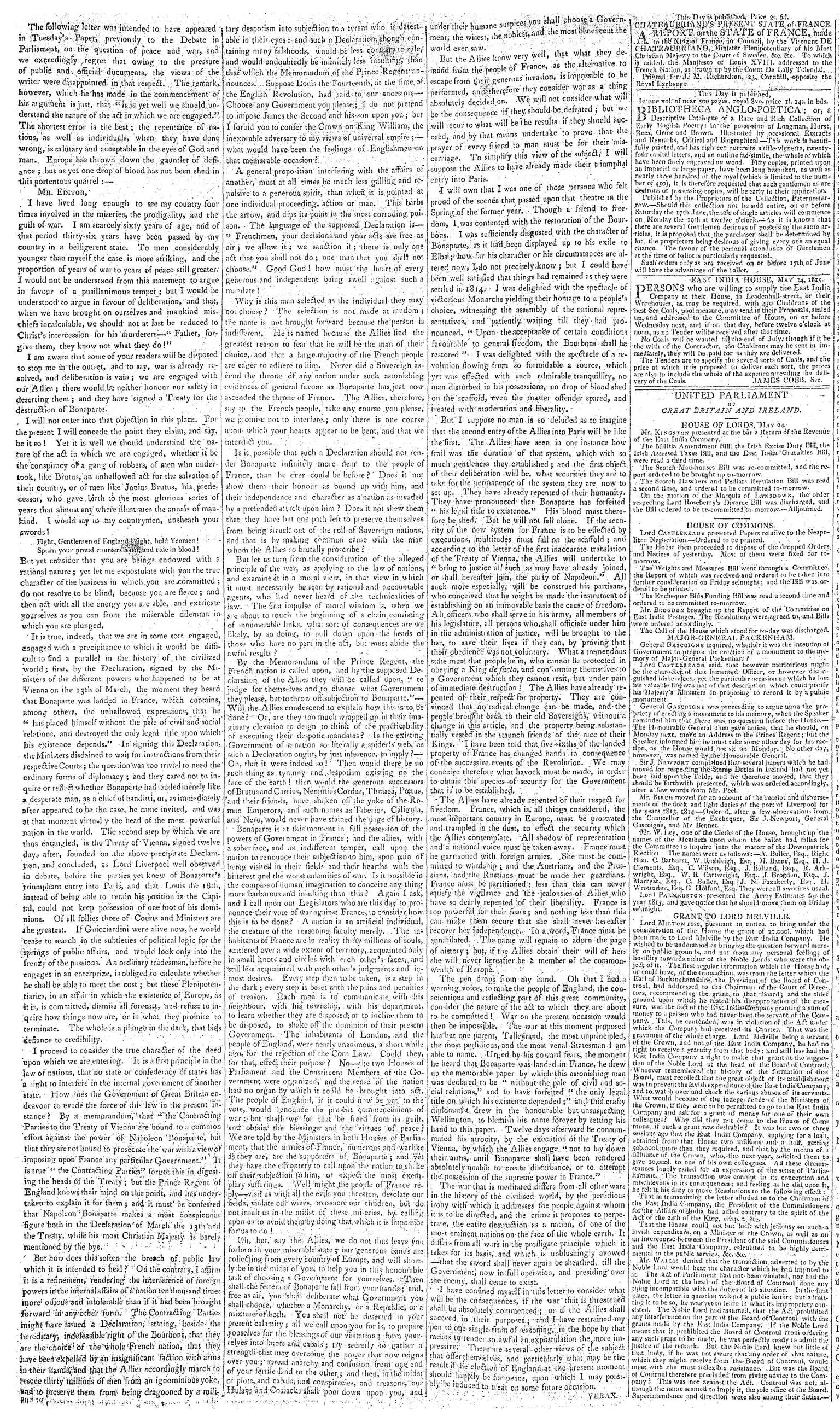 In Britain, the public mood towards Napoleon had dramatically changed since his abdication at the beginning of April 1814. The figure of the defeated despot who had oppressed Europe was giving way to that of the hero who had been unjustly detained on a small Mediterranean island and had boldly defied his captors with a handful of soldiers. By the same token, support for the Bourbons was ebbing away.

The novelist and philosopher William Godwin was one of the many British radicals who undertook to refute the claims of the Allies' 'Declaration of Outlawry' of March 1815, in which Napoleon had ben painted as a dangerous usurper of the Bourbon throne. He addressed two long letters to the progressive newspaper Morning Chronicle, at the end of May 1815. The letter reproduced here, signed under the pseudonym of ‘Verax’ (‘truthful’ in Latin), was published on the day the British Parliament voted for war against France.

By painting Napoleon as a ‘desperate man, as a chief of banditti’, argued Godwin, the coalition of monarchs had denied the legitimacy of his rule over the French. But if he had been ‘invited’ by the French population, then he was legitimate as a sovereign. What were the just causes for declaring a preventive war against France? Wasn’t it contrary to the established principles of the law of nations to impose a sovereign at the point of a bayonet? Who were Britain’s real foes in the long run, Napoleon or the European despots with whom the British government had chosen to side, who hated the very notion of freedom? Godwin’s rhetorical strategy turned upside down the accusations raised against Napoleon by those in favour of war: he was not the usurper, but Louis XVIII; he was not the tyrant, but those who refused to accept the popular will, with their ‘despotic mandates’; he had not shed blood after landing in the south of France, but the Allied armies would do so if they invaded the country and started a civil war. Ultimately, by siding with the Allies and entering a barbaric war against the French nation, Britain was betraying its cherished moral and political principles, those of humanity, civilization, freedom and representation.

For the background to Godwin's letter, see 'Further Information'.

The Allied powers faced a dilemma when they heard that Napoleon had escaped from Elba: as his reception in France seemed to prove, their despicable enemy remained hugely popular; how could a new war against Napoleon be justified? One legal solution was to try to detach him from the French: war was not to be waged against a state or a collectivity, but against an individual, with whom Europe could never be at peace. It was he who was to be punished, not those he had duped.

This strategy was on display in the so-called Declaration of Outlawry, signed at Vienna by the allied powers (Austria, France, Great Britain, Portugal, Prussia, Russia, Spain and Sweden) and published on 13 March 1815. Its language was exceptionally strong. Napoleon had broken the Treaty of Fontainebleau, granting him sovereignty over Elba, and had landed in France, which he would plunge into ‘confusion and disorder’. The responsibility for the legal and military consequences that would follow was placed firmly on Napoleon’s shoulders. Thus, the text read, ‘he has deprived himself of the protection of the law’, and had ‘placed himself without the pale of civil and social relations’.

In what many saw as a thinly veiled call for assassination, the Declaration asserted that the fallen Emperor had ‘rendered himself liable to public vengeance’ – a term, as the Duke of Wellington remarked, which originated in a bad English translation of the French ‘vindicte publique’, which he took to mean ‘public justice’. France was urged to make the right choice and support ‘its legitimate sovereign’, the Bourbon Louis XVIII, instead of this ‘enemy and disturber of the tranquility of the world’, animated by a ‘criminal and impotent delirium’. Failing to support its true king, the French nation would face, once again, a military coalition of European powers.
As Godwin's letter shows, however, this rhetoric did not necessarily convince the British public.